Chris Froome builds on his lead with show of strength 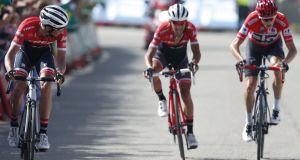 Alberto Contador (left) of Trek Segafredo looks over his shoulder at Sky’s Chris Froome as he crosses the finish line in the eighth stage of Vuelta a Espana between Hellin and Xorret de Cati. Photograph: Javier Lizon/EPA

Chris Froome extended his La Vuelta lead with a show of strength on Saturday’s eighth stage to Xorret de Cati.

Three-time Tour de France winner Froome (Team Sky) finished 14th on the stage, one minute 27 seconds behind, as his overall advantage climbed to almost half a minute.

Alberto Contador (Trek-Segafredo) was a place ahead of the Briton as the Spaniard and Froome finished 15 seconds ahead of the general classification contenders.

Froome now leads his nearest rival, Colombia’s Esteban Chaves (Orica-Scott), by 28 seconds ahead of Sunday’s ninth stage to Cumbre del Sol, which is expected to be one for the sprinters.

Ireland’s Nicolas Roche remains in third spot on GC after coming home 26th on Saturday’s stage, one minute and 55 seconds behind Alaphilippe.

Froome is seeking to become only the third person to win the Tour-Vuelta double in the same year and the first since 1978. The Tour of Spain was moved from April to its present post-Tour position in 1995.

The day began with Warren Barguil, who won two stages and the King of the Mountains prize at July’s Tour de France, being sent home by Team Sunweb for a refusal to obey team orders.

Barguil had been in 13th place, one ahead of designated leader Wilco Kelderman, who lost time without support of the Frenchman on Friday’s seventh stage.

As Majka and Alaphilippe engaged in a duel for the stage win up the day’s final climb, the Alto Xorret de Cati, Froome accelerated from the group of favourites behind them.

Only Contador, more than three minutes behind at the start of the day, could stick with Froome on the steep gradients as the Team Sky leader forged on.

Behind them Froome and Contador pressed on.

Froome has three times finished runner-up in the race, but he is continuing to make gains which could be crucial in two weeks’ time.