Plus: the record salmon on the Boyne, and a considerable catfish in Spain 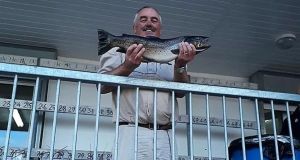 PJ O’Brien with his 7.5.5lb brown trout at Melvin Open 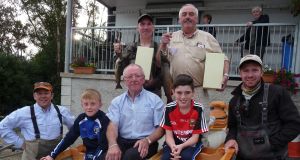 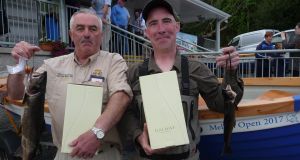 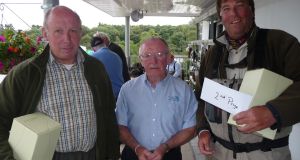 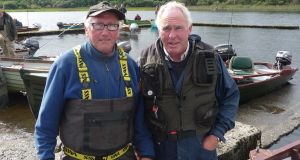 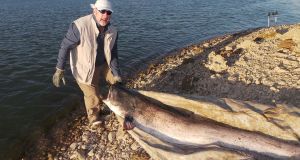 PJ O’Brien from Mallow, Co Cork, was the talk of the trout angling world in Ireland last weekend with his stunning double catch of two cracking brown trouts to win the 38th Lough Melvin Open Trout Championships at Garrison in Co Fermanagh.

The win became even more spectacular considering it was the sonaghan we had come to catch. These relatively small sub-surface feeders are found in deep water, where they feed on planktonic (daphnia) organisms. They are distinctive, with elongated pectoral fins and a dark hue. A fish of 0.5kg is considered a good size.

O’Brien’s two fish, however, were somewhat out of character with the above statistic. His first, on qualifying day, weighed 3.331kg (7lb 5.5oz). “I caught the fish on a Silver Daddy at the Sunken Island, and when close to the boat, it swam in and out of the net. Luckily, he was well-hooked in the ‘scissors’,” he said.

With boat partner Oliver Dillon, from Glencar, Co Leitrim, the pair managed a further three sonaghan to sail through to the final.

Fast track to finals day. Expectations were high among the 104 competitors. Could they, would they, surpass O’Brien’s finest?

“At about 3pm I put up a size-14 Olive with Blue Hackle in the Kinlough area and got a ferocious take. The fish swallowed the fly wholesale and wasn’t going anywhere,” O’Brien said. This fish weighed 1.575kg (3.47lb), plus one sonaghan for boating partner.

Meanwhile, renowned Corrib-based angler Basil Shields was busy picking up sonaghan to finish with five plus one from his boating partner, Matt Fahey.

This led to a nail-biting finish for first place. Was it to be the big fish plus one, or the six sonaghan? To the applause of the large gathering, master of ceremonies Terry McGovern declared PJ O’Brien and Oliver Dillon as 2017 champions.

The winning margin was .025kg, which equates to about one ounce. Unbelievably close.

For their efforts, the winning duo received two 19ft lake boats (finished by Foley’s Melvin Boats) plus two pieces of Galway Crystal. O’Brien intends to have the big fish stuffed.

Once again, the four-day spectacle was a resounding success, as 300 anglers converged on Garrison village, filling local hostelries to capacity and bringing a welcome economic boost to the area.

On the club hatchery front, Malcolm Finney said that out of 20,000 salmon eggs electro-stripped around Christmas from the local Rooghan river, 18,000 were placed back as fingerlings into the river above the waterfall, in April.

The remaining 2,000 were to form part of the club’s educational programme for children. “Unfortunately, it didn’t work out because the level of water fell in the lough,” Finney said.

Thanks were extended to the local Spar shop and Gilroys for the goodie bags issued to each angler, and to the women who provided the tea and sandwiches.

Record salmon on the Boyne

I received correspondence recently from Sonja, the daughter of TJ Murphy, who said her father caught the record salmon on the river Boyne, near Beaupark, in the 1950s. The fish weighed 35lb.

A model was made of the salmon but unfortunately she let it go to auction in Swynnerton, Brighton Road, Foxrock, in 1986. “I was just wondering where it might be, in a pub or hotel somewhere. I would love to see it again,” Sonja said.

Press photographer Kevin Cooper recently caught a 77kg (170lb) catfish in the River Ebro in Spain, just an hour after reaching the river bank. It is a personal best for him and believed to be the largest from the fishery this year.

Cooper flew from Belfast and was met by fishing guide Oliver Bentley of River Ebro Catfish. “I picked up the rod and struck, but apart from some bouncing there was no strong pull,” he said. “The fish was obviously swimming towards me until it decided to take line. Five times it took line before being brought under control.”

“Oliver provided expert advice and assistance, as well as being an excellent cook and personal driver,” he said. “Over the four days, 10 fish were lifted. All fishing licences, rods, tackle and fishing baits were provided. Licences are essential as bailiffs checked paperwork twice over the four days.”