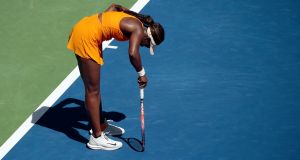 Sloane Stephens during her match against Anastasija Sevastova at the US Open. Photograph: PA

Defending champion Sloane Stephens became the latest big name to fall at the US Open on Tuesday.

In stiflingly hot conditions, the American went down 6-2 6-3 to Latvian Anastasija Sevastova, who is through to her first grand slam semi-final.

The exit of the third seed means Karolina Pliskova is the only member of the top 10 remaining ahead of her last-eight clash with Serena Williams on Tuesday evening.

Sevastova said: “It was very physical today, it was tough to play, it’s so hot. The first set was very important and I just kept fighting. We showed some nerves in the end but it’s normal. I’m so happy.”

The 28-year-old retired in 2013 after a succession of injuries drained her motivation. She spent two years studying leisure management but returned to tennis once she felt fully healthy.

She has had her best results in her second career, particularly in New York, where she has now reached the quarter-finals twice and the semi-finals once in the last three years.

Sevastova said: “It was an amazing journey, this three, four years. Right now you’re in the tournament, you’re playing next tournament next week, and you don’t feel it.

“But in the end it’s amazing, yes? You can’t believe. So, after I stop, at some point I will look at it and I will be proud of myself, for sure.

“I hope I will enjoy it, playing semi-finals. It’s not every day you play semi-finals of a grand slam.”

Stephens and Sevastova met at the same stage last year, with the American coming from a break down in the final set before winning on a deciding tie-break. It was arguably the closest she came to defeat in her remarkable run, but this time she could not extricate herself from her predicament.

Sevastova is one of the wiliest players on tour, mixing up slices, spins and angles and generally making life very uncomfortable for a player like Stephens who feeds off consistency of pace.

Stephens looked like she might have gained a foothold when she broke back for 2-1 at the start of the second set, letting out a scream of defiance, only for Sevastova to win the next two games.

There were signs the Latvian, seeded 19, was getting nervous as unforced errors crept into her game. Stephens clawed back to 4-3 and had chances to level up but Sevastova’s drop shots caught her off guard time and again and a particularly devilish one presented her with the chance to serve for the match.

Stephens saved two match points but not a third and later revealed she has been suffering from a sinus infection for two days.

She said: “I think today I just really couldn’t get anything to connect. Even when I did have my break opportunities, I just wasn’t playing the points well at all. It just was a really tough day. The heat doesn’t make it any more fun. The better player won.”

Stephens was proud of the way she defended her title and will now hope to fare better during the Asian swing than she did last year, when she failed to win a match for the rest of the season.

The 25-year-old said: “The fact that I made it to the quarter-finals and played some really good matches and I just competed as hard as I could, there’s a lot to be proud of.

“Obviously defending a title is very hard. I’m not going to dwell on it. Just keep building. There’s four more tournaments left. I’m just going to try to play the rest of the season as hard as I can and hopefully have some more good results.”