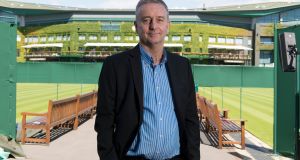 Dave Miley has announced his intention to run for the presidency of the International Tennis Federation. Photograph: Rod Leon

“Following significant encouragement and support from ITF member nations, I have informed the current ITF President and Board of my plans to run for President of the ITF at the next AGM,” said Miley in an email.

Miley ran for the position of Tennis Ireland chief executive following the retirement of Des Allen in 2016. Richard Fahy, who previously worked in the Football Association of Ireland, was subsequently appointed.

Unhappy with the interview process Miley took a complaint against Tennis Ireland, which was upheld by the Workplace Relations Commission (WRC) in July 2017. The WRC subsequently ruled Tennis Ireland was guilty of age discrimination, contrary to employment equality law, with Miley awarded damages of €6,500.

“Since I resigned from the ITF in 2015, I have followed closely the direction of the ITF and have been both surprised and saddened by the current challenges facing the organisation, especially as they relate to Davis Cup, as well as the ITF’s deteriorating relationships with many important tennis constituents,” said Miley.

“For 25 years, I worked for the ITF and for 17 years I acted as director of development, leading the ITF’s largest department. I care deeply about the organisation and believe that my extensive knowledge of the ITF and success in international tennis to date, combined with a successful business background, qualifies me to seek this position and, if elected, deliver strong leadership and vision for the future.”

The ITF president and board of directors are elected every four years by the national associations at the agm.

The current ITF president is American David Haggerty, who was elected in 2015. He was a previous chairman, ceo and president of the United States Tennis Association board of directors, and chairman of the US Open.

Haggerty was criticised earlier this year for turning the Davis Cup into a one-week World Cup styled event prompting Todd Woodbridge, the prolific former Australian doubles player, to describe the revamp as “thrown like a big bomb into the tennis landscape”.