Joanne O’Riordan: Ladies football championship shaping up to be best one yet 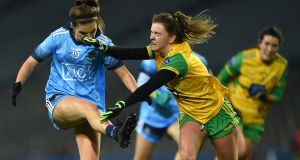 Dublin’s Kate Sullivan gets her shot away despite the attempted block from Donegal’s Niamh Carr during the teams’ recent clash at Croke Park. Photograph: Tommy Greally/Inpho

The ladies football league this year is one of the most exciting competitions to keep an eye on for the next two months.

Apart from the obvious contenders such as Cork and Dublin, you have the an infamous Mayo rebrand, the hills of Donegal coming alive, the sheer attacking fire Tipperary possess and Galway impressing game after game.

In Páirc Uí Rinn on a cold Saturday night, over 1,000 Cork fans were entertained by a fluid and free-flowing game of football that had comebacks, drama, fisted goals, decisive passes and all-round pure football.

While it is annoying for manager Ephie Fitzgerald that Cork didn’t close out the game, the main turning point had to be when Cork’s centre forward Niamh Cotter was substituted with 15 minutes to go. Unless fatigue was a factor, once she came off Cork seemed to open up far too easily and lacked a playmaker and someone to link play between backs and forwards.

For Tipperary, having seen them twice live, their attacking prowess is something to be marvelled at. Knowing that key forward Aisling McCarthy is still to return, and while all defenders are immediately drawn to Aishling Moloney, Tipperary have enough shooting power to upset any team, hence why the victory over Cork is not that much of a surprise to those following Tipperary.

Manager Shane Ronayne is obviously beaming at his team’s progress and performance, but defensively they are yet to shore up and stop conceding goals that could easily be avoided. While goalkeeper Laura Fitzpatrick is generally a safe pair of hands, to have her goal constantly being peppered with shots is not going to guarantee them safety from relegation.

Peter Leahy, while annoyed at losing to Dublin, can be happy with how his team performed and how they kept in it with literally three minutes to go.

Midfield for Mayo was incredibly impressive, and while that might have been an area for concern after last year’s upheaval, both Clodagh McManamon and Dayna Finn proved to be a dynamic duo going forward.

Full forward Rachel Kearns caused real havoc and had the Dublin full-back line under immense pressure, scoring 2-2 in total. The Kelly sisters were also tremendous, and Fiona Doherty’s point was, dare I say, the best point scored in Croke Park that day.

Another plus for Mayo is their corner back Danielle Caldwell, who dominated all game and was even unlucky to not get player of the match. Back in January, Leahy told reporters about looking for new players to step up and to stake their claim to become Mayo footballers. While Sarah Rowe is yet to come back from AFLW duty, he is now one of those managers who must be wondering what his perfect starting line-up is.

Even when he brought on the substitutes nearing the end, it wasn’t fatigue or the lack of strength coming off the bench, it was mainly that Dublin stuck with them (luckily) and were able to finish the game more than Mayo.

For me, Dublin are showing signs of vulnerability, and at a time where jerseys are there to be won while crucial players remain on their break, the only player looking to cause selection headaches for Mick Bohan is Siobhán Killeen, the Clontarf soccer hero.

Killeen is definitely one of those players that you don’t appreciate until you see her in the flesh. Her movement off the ball and her awareness to cut into open space in front of goal is still rattling defences.

Unfortunately for Dublin, their shooting is just not up to the standard it needs to be in this league. Niamh McEvoy, once again, proved she’s consistently one of Dublin’s best players and a player they cannot be without.

The only negative takeaway from the weekend was watching Tipperary and actually beginning to miss them from the senior competition. Players like Samantha Lambert, Aishling Moloney, Aisling McCarthy and even the wonder-kids coming through should be tested at a senior level.

The LGFA must look at the structures in place and actually ensure the best teams and players are being seen performing at senior level. Maybe in the future the LGFA should implement a system whereby teams have two years to show that they are worthy and good enough for senior.

While the league heats up (Donegal and Galway are three from three, while Tipperary are one win away from making a league semi-final depending on results elsewhere), it only shows how this year’s championship promises to be tighter than ever.

Sure, Cork and Dublin have seasoned personnel to enter the fray, but the standard is continuously rising and this year’s championship has the potential to be the best yet.