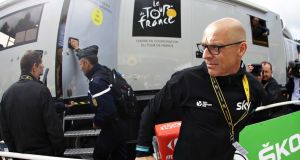 Dave Brailsford has said he would pull his Team Ineos squad out of the rescheduled 2020 Tour de France if he felt that the race’s precautions against coronavirus were not panning out in a “measured, intelligent and responsible way.”

“We would reserve the right to withdraw the team should we deem it necessary,” he told the Guardian, citing his team’s withdrawal from racing in March as Covid-19 infections gathered pace, prior to the Paris-Nice stage race. “Whilst the race is on, we will plan to participate, but equally we will monitor the evolving nature of how things play out, as we did prior to Paris-Nice,” Brailsford said. “This is a sensible, responsible and reasoned approach.”

After France’s president, Emmanuel Macron, banned any large public events until July 11th, the Tour’s original start dates in June were scrapped and the Grand Départ in Nice postponed until August 29th. However, the decision to go ahead with the Tour has drawn fierce criticism from Devi Sridhar, c hair of Global Public Health at the University of Edinburgh and adviser on the pandemic to the Scottish Government, who described it as a “recipe for disaster.” “The wise thing to do is cancel for this year,” she said. “It’s a painful decision but they have no choice.”

“There will be a lot of debate generated about the rights and wrongs of the transitions out of lockdown across all aspects of society including sporting events,” Brailsford said. “Equally most people recognise that the learning from transitioning out of lockdown will only take place once it begins. We will monitor the situation very carefully and of course take note of national guidance and all advice.”

Jonathan Vaughters, manager of the US-based Education First team, said that he believed that the Tour’s promoters, ASO, had ruled out the option of a Tour “behind closed doors”, without roadside spectators, too hastily. He said: “I don’t see the logic in declaring that they would not have it behind closed doors. I know that wouldn’t be tradition, but that seems a good option to me, because you’re minimising risk. I don’t want to see that option eliminated. If I was them, I would consider that a serious option, rather than their stance which seems to be, ‘it’s all or nothing.’”

Like Brailsford, Vaughters confirmed that both he and his team’s sponsor, Education First, would be seeking assurances from the Tour organisation. “We would want to see proper mitigation techniques before the event,” he said. “Maybe by July or August the virus has abated to the point that it’s not such a risk, but I can say that if there is a risk of a second wave that the Tour might be part of, then we would demand that there would be major mitigation before the event.

“It’s probably a good idea to quarantine the riders before the start,” he said, “but the attitude from ASO seems ‘it’s either the way we have always done it or not at all’, which is maybe a little short sighted on their part. It’s better to bring in these extra measures than not have the race at all.”

Vaughters acknowledged that the desire to hold the Tour was good news for cycling’s business model. He said: “The Tour could be a bell weather for the economy because if it happens, it’s a sign that things are improving. But we also have to watch China very carefully and see what happens there as it opens up.” - Guardian