Greatest ever night of athletics as Cobh runner claimed silver in the 5,000m 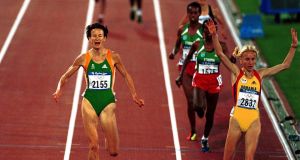 Before Dundrum became a Town Centre and they paved our paradise we lived just around the corner on Weston Park and every summer transformed the place into a running track.

There was that neat, 100m stretch which ran from where Paul Somers lived down to the Reidys. The 200m start was outside Billy Byrne’s and the finish was down at the Floods. And if we carried on into Weston Grove and through the laneway and back out again we had the perfect 400m circuit.

On some summer evening’s those long straights and tight bends easily passed for Oslo’s Bislett Stadium. At least they did for our purposes. We would line up as Steve Cram, Seb Coe and Carl Lewis and we smashed world records with incredible ease. Sometimes twice in the same evening, sometimes being crowned World Champion in the 100m and the marathon within half an hour.

Occasionally, we were joined by John Treacy, the real one, who would spend the odd couple of nights in our house, and when we were finally called in we headed for the kitchen sink with the warm sweat still on our backs and splashed cold water over our faces. For sure, Weston Park was the fastest running track in the world. Best night of athletics ever!

That track witnessed some of the finest talents of the sport, though much less heralded: Mark Kelly, Trevor Bailey, Michael Hoey, some of the greatest athletes I’ve known to retire without winning an Olympic medal. Because the Olympics were different: they only came around once every four years, now that was pressure, and held us spellbound by their magic like no other sporting evening on earth.

In the summer of 1984 I was 12 years old, and our mother carted the four of us off to the Aran Islands while dad went off to Los Angeles for three weeks to report on the Olympics. There were lots of medals won and lost on the beaches of Inis Mór that August, before we loaded everything back onto the ferry and then drove from Galway back to Dublin in time for the start of the men’s marathon.

“They won silvers with John McNally . . . Fred Tiedt. Wilkins . . . Wilkinson, and now for the 13th time, an Irish medal goes to John Treacy. The crowd stand for the Irishman from Villierstown in Waterford. The little man with a great heart . . .”

Something and everything about Jimmy Magee’s magnificently spontaneous sporting commentary held us spellbound then as is does now, because the Olympics are so different: Treacy running into the Los Angeles Memorial Coliseum, with Britain’s Charlie Spedding on his heels, the marathon the final event of the 1984 Olympics, the stadium crammed with 92,500 spectators, the medal presentation actually part of the closing ceremony.

The image too of Treacy standing on that Olympic medal podium, alongside Spedding and gold medal winner Carlos Lopes of Portugal, remains beyond any moderate or concise praise. The performance that day was heroic in every sporting sense, not only because it was his first marathon, in arguably the greatest marathon field ever assembled, but simply because he was not expected to medal.

It’s often forgotten Treacy had run the 10,000m heats, then the final, the week before – that’s 50 laps of the hot Coliseum – finishing a respectable ninth: “I’m still doing the marathon, definitely,” he told reporters immediately afterwards, some of whom had genuine concerns for Treacy’s chances of surviving another 26.2 miles of running in the crippling heat of Los Angeles.

Which is also why Magee’s commentary – recalling Ireland’s 12 previous Olympic medal winners in the time it took Treacy to run the final 100 metres – remains so magnificent too. It could have been time too to recall some of the other great athletes to finish without winning an Olympic medal: Eamonn Coghlan, Paula Radcliffe, Daniel Komen.

Fast forward 16 years, to Monday, September 25th, 2000 to be exact, and a night in the life of the Olympics like no other. This time they came in bigger numbers again to Sydney’s Olympic Stadium and filled it to a capacity 112,574, in part to witness Australia’s moment of glory, and ended up being spellbound by nine finals, one epic showdown after another, plus some Olympic redemption at last for our own Sonia O’Sullivan.

After lighting the Olympic flame 10 days earlier, in a moment of emotional Australian unity, the 27-year-old Cathy Freeman, with distinct Aboriginal origins, is expected to deliver their first track and field gold medal in the 400m. Which is exactly what she does, walking onto the track dressed in a tight, hooded body suit, looking every bit the super hero, but pressure written all over her face. She crouches into the blocks, lane six, and when the gun fires, the entire stadium erupts.

Freeman seems born for this moment, but it’s not looking easy, and only around the final bend does she hit top gear, and burn off Jamaica’s Lorraine Graham and Britain’s Katherine Merry. The roar is deafening, her time of 49.11 the fastest of the year, and Freeman just sits motionless on the track, her blank expression mirroring the impossibility of it all.

Part of the night too belongs to Britain Jonathan Edwards, still haunted by his defeat in the 1996 Olympics, and the two World Championships since, winning gold in the triple jump; Cuba’s Anier Garcia winning the 110m hurdles, Britain’s Colin Jackson, running in his fourth Olympic final, finishing fifth, once again missing that elusive Olympic gold; the American Michael Johnson running a lap of the track in 43.84 and becoming the first man in Olympic history to defend a 400 metres; Maria Mutola from Mozambique winning the women’s 800m, and Haile Gebrselassie – the defending champion from Ethiopia – chasing down Kenya’s Paul Tergat, leaning with all his might, and stealing the 10,000m gold, 27:18.20 to Tergat’s 27:18.29.

In between all that at 8.55pm local time, at 11.55am in Ireland, they line up for the final of the women’s 5,000m, and the pressure seems perfectly etched somewhere on the face of O’Sullivan: her fourth place finish in the 3,000m in Barcelona in 1992, the nightmare of Atlanta four years earlier, perhaps even the possibility of finishing her great career without an Olympic medal.

Whoever came up with the schedule couldn’t possibly have predicted either that O’Sullivan was lining up on the backstretch for this final, just as Freeman was being summoned to the medal podium, and watching them both from the stand would be Nic Bideau – the former coach, manager and partner of Freeman, and now partnered with O’Sullivan.

Right now, however, O’Sullivan has other things to worry about, as after just three laps, she starts to tail off, drifting back to second last, some 40 metres behind race leader Gabriela Szabo – her old nemesis from Romania.

Inexplicably, it seems, the leaders slow, O’Sullivan recovers, magically it seems, until with 600 metres to go, Szabo darts into the lead.

O’Sullivan chases hard, her Olympic dream suddenly alive again, and crazily they go neck and neck all the way down the home stretch – Go, Go, Go! – until Szabo just about nails it, in 14:40.79, with O’Sullivan falling .23 of a second short.

Not that it matters: O’Sullivan becomes the first Irishwoman in history to win an Olympic medal on the track, and deservedly celebrates with a lap of honour, the tricolour in one hand, a furry wombat in the other, exactly as Freeman gets her gold medal on the podium.

The best night of athletics forever!

Share your favourite sporting moment to be in with the chance to win a selection of sports vouchers. Entries should be no more than 400 words and can be sent to sportingmoment@irishtimes.com. The three overall winners will be published on Saturday, April 18th.