August Tour de France could be a ‘recipe for disaster’ 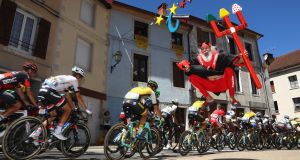 Didi ‘The Devil’ Senft jumps in the air during stage 16 of the 2016 Tour de France, from Moirans-en-Montagne to Berne in Switzerland. Photograph: Michael Steele/Getty Images

Devi Sridhar, the chair of Global Public Health at the University of Edinburgh and also a key adviser to the Scottish government on the Covid-19 pandemic, has described the plan to stage the Tour de France in August as a “recipe for disaster”.

“The wise thing to do is cancel for this year,” she said. “It’s a painful decision but they have no choice.”

The Tour was this week moved from its original late June start date to a new Grand Depart in Nice on August 29th, following the banning of any large public events until July 11th by French president Emmanuel Macron.

“This is a long-term problem, a chronic problem,” Sridhar told cyclingnews.com. “This virus is here to stay and will come back. Even if France gets a handle on it by August, then of course the issue is people coming in from different countries.”

Sridhar pointed to a series of potential risks, that might even lead to the Tour being halted if there was an outbreak within the race convoy during the race. “There’s definitely a risk that the Tour de France moving around and unwittingly spreading the virus could kick start a new lockdown.”

While the Tour’s television partners were delighted to hear that the race was going ahead – “It’s very good news,” said Laurent Prud’homme, director general of French Eurosport – Sridhar urged Tour owners ASO to rethink their plan.

“They have to weigh the risks against the benefits. Thousands of people from all over the world, gathered together, moving around, from town to town, this is where a virus could thrive – it could be a recipe for disaster,” Sridhar said.

She also suggested that those arriving in Nice for the race from countries outside France should be quarantined. “This [the arrival of the Tour’s international convoy] could set off a new cluster of infections so you’d have to think, at minimum, of a two- to three-week quarantine before they properly come into the country.”

Ideally, Sridhar added, while acknowledging that the logistics would be “mind-boggling”, once the race has started, the organisation would test everybody in the convoy every day. “We know 20 per cent to 60 per cent of people are pre-symptomatic, in that they feel fine and exhibit no symptoms but are passing the virus to others.”

While most European riders have reacted positively to the new scheduling, the participation of some, including defending champion Egan Bernal, currently confined to Colombia, is not yet a given.

“It hasn’t escaped me that the current champion is in Colombia, but Europe is at the heart of cycling and the majority of riders live in Europe,” Tour director Christian Prudhomme said.

The rescheduled dates have also caused a headache for other lesser race promoters, including Tour of Britain organisers Sweetspot, as the postponed Tour de France now clashes with their own race which runs from September 6th-13th. Another problem for the British race is a clash of live TV coverage as official race broadcaster ITV also shows each stage of the French race.

“The position we find ourselves in is unprecedented,” Tour of Britain promoters Sweetspot said in a statement. “We are closely monitoring each development as it happens and acting accordingly with our partners and stakeholders across Britain to do the right thing, with the health and wellbeing of all of our supporters being of paramount importance.” – Guardian