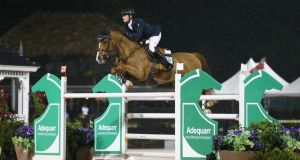 A full field of 45 competitors lined out under lights and a rain-filled sky to take on the first-round 1.50m track designed by Peter Grant of Canada with 10, including the Irish pair of Offaly native Kenny and Co Limerick-born Paul O’Shea, advancing to the jump-off.

Riding Skara Glen’s Machu Picchu, O’Shea picked up seven faults over the shortened course but, recording one of seven double clears, Kenny claimed the honours when stopping the clock on 42.422 with Classic Dream, a nine-year-old German Sport Horse gelding by Colestus. The US pair of Kent Farrington and Beezie Madden finished second and third on Baltic Star (43.23) and Chic Hin D Hyrencourt (44.20).

“I kind of just went!” said Kenny when asked about his second-round strategy.

“He hasn’t done so many jump-offs. He has never jumped a Grand Prix like this before, but he really wants to do a good job. I think I was lucky. I got a really good turn back to the Rolex (jump) and to the wall, and he just tries to miss the jumps, so for me it is easy if I don’t screw it up.”

Kenny, who won the first international class of Week 3 of the Winter Equestrian Festival with Vlock Show Stables’ Billy Dorito, purchased Classic Dream as a six-year-old with World Champion rider Jos Lansink, who then sold his share to Thompson.

“This is a really amazing result for us because we bought the horse when he was six, and we have produced him the whole way along,” said the rider. “I think we are both really excited about the horse. Today he showed that he has a lot of quality and ability, and I think we are just going to take our time with him.”

Earlier in the day in Europe, Co Kildare-born dressage rider Judy Reynolds set a new Irish international record score of 80.29% when seventh in the Grand Prix freestyle to music in Amsterdam with Vancouver K.

“I’m really delighted to break 80% and set a new Irish international record score,” said Germany-based Reynolds who had set the previous record of 79.70 in Doha in March 2016 on the Jazz gelding which is owned by her parents, Joe and Kathleen. “It has been coming for a while and great to achieve it here in Amsterdam in a very hot class. It’s the year of the European championships and I hope that there is more to come this season.”

The reigning World champion, Germany’s Isabelle Werth, won the class with yet another impressive performance on her Oldenburg mare Weihegold (86.81) ahead of her compatriots Dorothee Schneider riding Sammy Davis Jr (82.675) and Helen Langehanenberg on Damsey FRH (82.440).