Mageean and Healy blow off winter cobwebs in fine fashion 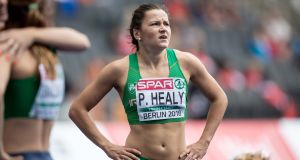 Phil Healy recorded the fastest 400m indoor time in the world in winning the Vienna International in a time of 52.31. Photograph: Morgan Treacy/Inpho

Posting a new Irish record over the mile, and a new European lead over the 400 metres, Ciara Mageean and Phil Healy both blew away some winter cobwebs and then some with their opening indoor races of 2019.

Mageean was part of a high quality women’s mile at the New Balance Games in Boston on Saturday night, and finished sixth in 4:28.31, improving her own Irish indoor mile record of 4:28.40 set three years ago.

Victory on the night went to the Canadian Gabriela Stafford in a personal best of 4:24.80, with Mageean getting the better of several world-class athletes, including the American, Brenda Martinez.

An added bonus, it is also well inside the 1,500m qualification time (4.36 mile) needed for the European Indoor Championships which will take place in Glasgow in the first weekend in March.

Earlier in the day, Ireland’s fastest women Phil Healy has got her indoor season off to a great start winning the Vienna International Indoor Meet in 52.31 seconds. This is the fastest time so far by a European in 2019 and the second fastest in the world, and also augers well for the Cork woman as she looks to take on the best in Europe in Glasgow.

She also left several top-class athletes in her wake: Lissane De Whitte of Netherlands, European bronze medallist from Berlin 2018, was second in 52.66, with Britain’s Eilidh Doyle, a bronze World Indoor medallist from 2018, third in 53.08.