Federer and Kerber can rise from Australian Open ashes 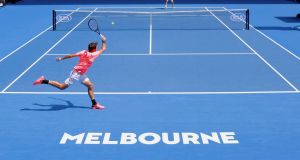 Only a few days before the first ball is struck, the Australian Open resembles a shredded carcass. So ravaged are both draws, it is a taking a leap of faith to declare across time zones that there will be no more wounded joining the leading women and men who have either fallen or are sinking to their knees before the first grand slam of the season.

A year ago, the one-time prodigy Mirjana Lucic-Baroni laughed at the years when she re-entered the top 20 at 35 and enjoyed a dream run to the semi-finals in Melbourne; on Monday, she was forced to quit through illness when trailing Petra Kvitova 1-6 in Sydney. A week ago, Kvitova, who has thrilled the sport since coming back from a knife attack in her home two Christmases ago, had to retire with viral illness from the Brisbane International.

There seems no escape from cumulative injury or sporadic ill-health on either the ATP or WTA Tours, as the seasons do not so much rage and subside but overlap from one minor crisis to another. Form and pedigree have been rendered irrelevant to the point where it is difficult to identify a reliable favourite among the top 10 seeds in either the women’s or men’s draw.

As it stands, Roger Federer could be king of Melbourne again at 36, winning his 20th major, and perhaps Angelique Kerber can rediscover the magic that lifted her to the women’s championship two years ago but you would not bet on either outcome.

In the absence of the defending champion, Serena Williams, who feels unready to return yet after the birth of her first child, Olympia, Victoria Azarenka might have fancied her chances in a diminished field, but has had to pull out because of the custody battle for her young son, Leo. There is no serenity in any corner of the game, it seems.

In Sydney on Tuesday, Britain’s best hope for honours in Melbourne, Johanna Konta, survived a thorough examination of the hip that gave up on her in Brisbane last week but could not get past the player she beat in last year’s final in her home town, Agnieszka Radwanska. In Auckland, the leading British male left standing, Kyle Edmund, pulled out of the lead-up tournament to protect the rolled ankle that decked him in his quarter-final against Grigor Dimitrov in Brisbane.

On Tuesday, Rafael Nadal, who was 3-1 up in the deciding set of last year’s Melbourne final before losing to Federer, looked below par, losing in two sets to Richard Gasquet at Kooyong. It was the Frenchman’s first win over the Spaniard in 16 attempts on the Tour (although he did beat him in a 2003 Challenger). So even though Nadal was moving freely during Wednesday’s quickfire Tie Break Tens, doubts will swirl around the 31-year-old, who withdrew from Brisbane and whose knees are aching again.

As, for six months, were those of Stan Wawrinka, who risked double-surgery last year and missed the second half of the season along with Novak Djokovic, who is making bellicose noises again about his chances. He returned to competition on Wednesday, dispatching the world No5, Dominic Thiem, with ease at Kooyong on his comeback from the ailing elbow that has kept him out since day nine of Wimbledon – the fateful exit mark for Murray, as well.

Djokovic, who was wearing a compression sleeve on his right arm, did, though, admit: “I’m very happy with the way it went today but I don’t want to say it’s 100%, I’ll say that when I start a tournament and I actually feel that it is 100%.”

Support for the immensely strong Wawrinka had been growing, but he pulled out of the Tie Break Tens on Wednesday, casting doubt over his participation in Melbourne and it would be asking a lot for him to emulate his Swiss friend, Federer, who shocked the world a year ago after being out for seven months. It is almost as if these players have entered into an unspoken pact to collapse in unison, like dying swans. They are mostly over 30 and have dominated lesser players in recent years with only rare lapses.

It is impossible to ignore the sense of confusion and suffering that has pervaded the tournament. Anyone can beat anyone. Some players can beat themselves, as they struggle to trust their own bodies. It makes for tension and even excitement, perhaps. Whether it will deliver tennis of the consistently high quality expected of a major is another question.

1 Gerry Thornley: Saracens very late to apologise for repeated cheating
2 How to get to the Champions Cup final without breaking the bank
3 Does Ireland need to get in-line with UK’s stricter gambling laws?
4 Felix Jones expects De Allende and Snyman to boost Munster
5 Pep Guardiola says it’s time to axe the League Cup
Real news has value SUBSCRIBE