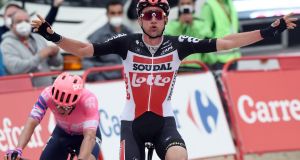 Team Lotto rider Tim Wellens celebrates as he crosses the finish line to win stage 14 of the Vuelta a España from Lugo to Ourense. Photograph: Miguel Riopa/AFP via Getty Images

The bike and the body language were both in fighting mode and Dan Martin clearly hasn’t given up the chase, the main obstacle now between regaining his podium place in the Vuelta a España being the limited amount of road that remains before Madrid.

With only four stages left to ride, including the customary procession into Madrid on Sunday, Martin may well be counting down his chances of moving up from fourth place, or perhaps counting on something else. Either way it’s certainly not over yet for the Irish rider.

Everything about the 204km and profile of stage 14 into the northwest spa city of Ourense suggested it would be a day for the breakaway, which it was, Tim Wellens of Lotto Soudal sprinting off the front of the six riders that remained to take his second stage win of the race, just about denying Michael Woods of EF Pro Cycling his second stage win in the process.

The main peloton were content to let the breakaway off from a long way out, effectively giving up the chase after the last climb on the Alto de Abelaira. Martin wasn’t letting the three race leaders relax, taking charge of the main group that came in three minutes and 44 behind Wellens, and finishing eighth overall.

That didn’t amount to gaining any time on Primoz Roglic, who finished two places behind, the defending champion from Slovenia still leading second-placed Richard Carapaz by 39 seconds in the general classification, with a strong Jumbo-Visma team behind him, with Britain’s Hugh Carthy also just off Martin’s wheels on the day, and so still 55 seconds clear of the Irish rider in third.

It may only have been reminder to the trio in front that Martin hasn’t yet gone away – it what was also his seventh top-10 stage finish – and while both Thursday and Friday present plenty more bumpy roads and long grinds across Galicia, they are, however, downhill finishes, and unlikely to afford Martin much of a chance to open any road on the three ahead of him, even if he benefits from any stage-winning bonuses.

So Saturday’s penultimate stage, the 178.2km from Sequero to La Covatilla and featuring five intermediate climbs before finishing at the ski station, is therefore likely to be his last proper chance to regain the third-place podium position he had held from the opening stage, only to lose it to Carthy on Sunday after the British rider won the stage finish on the Angliru.

Despite losing further time in Tuesday’s 33.7km time-trial, Martin remains positively upbeat, especially given he was the fastest of every rider up the steep final incline of 1.8km, including Roglic, Carapaz and Carthy.

“As long as we’re still in the fight for the GC, we need to be happy,” said Martin. “Of course, it’s not going to be easy to take back time, but we never expected to be in this position. I gave it everything again, and my rivals did incredibly, and you’ve got to give them credit. But we’re still looking for opportunities over the coming days to see what we can do to improve our position.”

Sam Bennett also finished stage 14 strongly in the group that finished just six minutes and 50 seconds down, in 120th place on the day, and with that staying very much on course to contest the final bunch sprint in Madrid, the Irish rider finishing a close second in the final stage last year.

For now, Martin has two previous Grand Tour winners ahead of him, Roglic winning here last year, Carapaz winning last year’s Giro d’Italia, and while Carthy may be the outsider on the podium, he may take some hope given the last time a Vuelta stage finished at La Covatilla in 2018, another Briton, Simon Yates, took over the lead and held it to Madrid.

Chris Froome hasn’t given up the chase either for his Ineos Grenadiers team-mate Carapaz, saying “we’re going to be awake for opportunities to try to regain the race lead.”

Still it will likely take something dramatic in the three days before the last stage to Madrid to alter the race outcome, which can happen in Grand Tour cycling. Seán Kelly offered a reminder of that on Twitter, saying that the hotel at his Eurosport commentary base was set to close on Friday, three days before the race finish, which brought back memories on his own Vuelta abandons.

Kelly did win this race in 1988, but didn’t finish his first one, in 1979, then in 1987, having taken over the race lead on stage 18, with only four stages to go, he was forced to abandon after a saddle boil became infected. Not that Martin would be counting on something like that.