Dan Martin slips back on Col d’Izoard to finish 70th 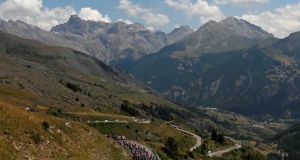 The peloton on the Alpine stage 18 of the Tour de France from Embrun to Valloire. Photograph: Reuters/Gonzalo Fuentes

Dan Martin’s aim of bouncing back in the Alps derailed on Thursday on the first of three such mountain stages, with the Irish pro losing contact early on in the stage and eventually finishing 70th, 28 minutes and two seconds behind stage winner Nairo Quintana (Movistar Team).

Martin cracked with approximately 80km left, slipping back on the Col d’Izoard. He said he was taken aback by what happened give the very different sensations he had earlier in the day.

“At the start I actually felt really good. I decided that maybe it was better not to go in the breakaway. I didn’t expect the breakaway to go to the finish, to be honest. I thought I would see how the fight for the general classification goes. I expected the victory for the stage to come from that fight, and maybe I could take advantage of being a little bit further back. So I actually felt really, really good.

“But on the Izoard I was just completely empty. We don’t know why still. It was similar to what happened in the Pyrenees. I am working with the medical team to try to figure out why, and hopefully we can feel better in the next days.”

Martin still wants to take a big result in the race, and said that he made a decision when it became clear his legs were not right for Thursday’s stage. “Once I had those feelings, I thought, ‘right, it is best to save all the energy to try to win a stage in the next two days.’ That is the objective now, to be really aggressive and to try to win a stage.”

Nicolas Roche has a similar goal and finished just over a minute back from Martin. He is also aiming to go on the attack on the two remaining mountain stages.

Martin has now dropped from 14th to 19th overall. Roche is 33rd.