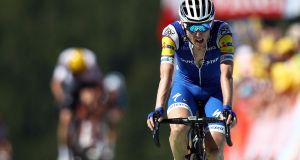 Dan Martin: in fifth place overall after a gruelling stage 12 of the Tour de France, a 214.5km trip from Pau to Peyragudes. Photograph: Bryn Lennon/Getty

Stage 8, Saturday, July 8th: Dole to Station des Rousses, 187.5kms: This was a really brutal day, the first big mountain stage of the Tour. Even though I said beforehand that I thought the general classification riders would finish together, the stage was incredibly intense.

Probably over half the peloton all tried to be in the day’s early breakaway, and that showed in very aggressive racing. I didn’t feel good at the start but towards the end, I had come around and felt very relaxed on the last climb. I had to hold myself back from launching an attack any earlier than I did. I knew it was going to be pointless to go on the climb as it was such a long way from there to the finish line, and there was also a tailwind.

With two kilometres to go Sky really stalled on a little rise. I went at the right time, got a real jump on the group and got a gap. But then they worked strongly as a unit and within a kilometre they had closed me back down again. Unfortunately the move came to nothing, but it was fun to try.

Stage 9, Sunday, July 9th: Nantua to Chambéry, 181.5kms: The sound of pouring rain when we woke up wasn’t a good start to the day and it continued to result in incredibly slippery roads on a stage route already regarded as treacherous.

I had a few scares. Early on a spectator stepped out on the road and I hit them quite hard with my shoulder, almost bouncing me off my bike and losing my sunglasses with the jolt. At some point after that, we were riding on one of the descents. The Polish rider Rafal Majka sprinted past me and promptly crashed, sliding off.

In the chain reaction caused by that, Sky’s Geraint Thomas, who had started the day second overall, went down too. He was just in front of me and his bike bounced up, hitting my handlebars and nearly bringing me down. I was on the grass on the right and skidded right across the road onto the grass on the left. I managed to regain the tarmac and stayed up, but a lot of riders ended up on the floor.

The day’s final climb was the Mont du Chat and I felt okay there. Not great, but quite good. I was a bit under pressure when some attacks went but I paced myself, getting back to them each time.

There was a twisting, tricky descent after the summit. I chose to follow Richie Porte as he is usually very careful. However he skidded his back wheel on the road, got a corner wrong and crashed. I took evasive action and tried to go as far right as possible, thinking that that he wouldn’t slide that far across the road but in the end he collected me perfectly, bringing me down.

I jumped up, got a replacement front wheel from the Mavic neutral service car, but found out on the next corner that the brakes weren’t working and I crashed again. I got a spare bike from my team and chased hard, catching the group in front and finishing one minute 15 seconds back. Although I limited my losses very well, it was frustrating – I dropped two places to sixth overall and lost out on the chance to go for the stage win. On paper I was probably the fastest sprinter there, but I was left to try again for a victory.

Rest day, Monday, July 10th: On our off day we woke up to very cloudy skies and then, just before we left on our training ride, there was a big thunderstorm with torrential rain. Because of that we rode on the home trainer. I only did about 45 minutes on it, just to spin the legs out and keep the body moving. Luckily it was a sprint day the next day so the body would have another chance to recover from the crash. I saw the osteopath and physio and tried to rest up as much as possible.

Stage 10, Tuesday, July 11th: Périgueux to Bergerac, 178kms: I didn’t feel good at all on Tuesday because of my crash on Sunday. My back was really sore and I could barely even get onto my bike at the start. But once I got going I could pedal okay.

I struggled a fair bit when the pace heated up in the end, but I was never in any risk of getting dropped or anything. The body just goes into a state of shock when it is trying to repair itself. I was lucky enough not to lose much skin on Sunday, but the impact of hitting the wall meant my muscles were all tense and my whole body just wasn’t quite working well. Fortunately, it was one of the easiest stages of the Tour and we managed to win the stage with Marcel Kittel.

That was his fourth stage win of the Tour, and morale on the team was soaring.

Keep on keeping on

Stage 11, Wednesday, July 12th: Eymet to Pau, 203.5kms: There was yet another stage win for Marcel on Wednesday – his first time taking five in a single Tour. Marcel is such a great guy and is a close friend of mine.

Personally my feelings were a lot better, although I was still very far from perfect. I still felt like I was hit by a bus, but I definitely felt a lot straighter on the bike. I could actually pedal a bit better. I was comfortable and not overly stressed in the final.

However I went to stand up after I got off the bike and I could barely straighten my back. It was a reminder of that crash. There was clearly nothing broken, but you never know if there is a muscle tear or something in there. But what can you do if there is a problem? It is the Tour de France. I was never going to go home and give up.

You just get on with it and I was desperately hoping I would have my power back the next day and to be able to conserve my sixth overall.

Stage 12, Thursday, July 13th: Pau to Peyragudes, 214.5kms: After my crash, the 12th stage was the one I was most worried about. It is one of the hardest in the Tour and if I’d had an off day because of my injuries, I could have lost a lot of time. I felt really bad from the very start. I was tired, had no energy and was just empty. But as time went on I felt better and better. When we got to the climbs I actually started to feel quite good. I just wanted to relax and save as much energy as possible.

At that point I started to think about the stage victory. However once I got out of the saddle with 300 metres to go, nothing happened. My back was just completely locked up. I had to almost sprint sitting down. It was unfortunate, but I would have definitely taken that result before the start because of my crash and how it has affected me.

I moved up a place to fifth overall as the rider who had been in that position, Jakob Fuglsang, dropped back due to the two fractures he suffered in a crash on Wednesday. He tried but the injuries proved to be too much. I’m happy to be fifth – it sounds better than sixth – but it is not a nice way to move up.

Personally I wish I could be more aggressive but for now I have to ride my own race and continue recovering. In the Alps we’ll see what I can do.