Roger Federer still doing what he does best – breaking records 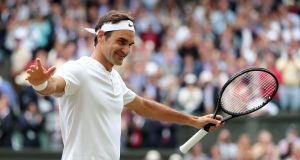 Every time he plays it seems the record books have to be redrafted. An often immaculate Roger Federer earned his place in a record 11th Wimbledon final where he is now chasing a record eighth Wimbledon singles win and a record 19th Grand Slam title.

The 35-year-old has yet to drop a set at this year’s championships as he faces Marin Cilic in Sunday’s final. Federer is now the poster boy for good sense and making excellent choices. Six months out chilling, back for an Australian Open title, no clay court season to preserve his body and he bounces into the Wimbledon final.

“He is proving his greatness in our sport. That’s all I can say about that,” said a beaten Tomas Berdych afterwards. “This guy doesn’t seem to get older or slow down. It’s extremely difficult. I think he is playing by far the best tennis.”

From a Berdych point of view the match must have been a soul destroying exercise and he did not play that badly.

But if there was a snapshot of what the 31-year-old had to endure from the man with winged feet and golden hands, the sixth game of the third set did just that.

At 3-2 up Berdych finally earned two break points on the Federer serve and threatened to extend the match beyond its final 7-6 (4), 7-6(4), 6-4 end point. A tremor of surprised concern rippled around the crowd as people confronted Federer’s sudden expression of imperfection.

So he tucked a sprig of black hair under his head band, threw the ball in the air and hit and ace. He moved across the court and hit another ace. He stepped back again and hit an unreturnable first serve before plunging the knife as deep as he could with a third ace for the game. Serve saved.

The troubled frowns swiftly moved towards awe and great sighs of pumped up glee, more at the on-tap strength of mind and purpose than the banging down of three aces.

Unafraid to add filigree to the match, in the ninth game of the third set as he began the final crush of his opponent Federer hit a no look cross court forehand that he had borrowed from the squash court.

It was a match in which Federer slowly built up pressure and, hard as Berdych tried to find stress points and looks at his opponent’s serve, the more Federer raised the volume of his game. Berdych was trying to find a way. He kept running up dead ends.

The pair exchanged serves in the first set as Formula One champion Nico Rosberg watched the high octane exchanges from the Royal Box. Prior to the semifinal Berdych had faced just 10 break points in five matches on his serve. Federer forced nine and took two.

The first and second sets took two tie breaks to separate the pair and for Federer to show a clean pair of heels. From there the Czech player was chasing. They were tight sets but Federer, on key, is a stress machine and few games hold up.

The first set lasted 53 minutes, the second 49 minutes and the third 36 minutes as it spiralled out of sight. Federer took one of two break points in the third set to fend off another tiebreak and served out for 6-4, the match tidied up in 2 hours 18 minutes.

“Sunday is going to be a different day. We don’t know what the conditions will be like. But I am going to have to play within myself,” said Fededer.

“The breakers, I played well there. I was able to close it out. I didn’t play with any sense of panic which is important.”

Federer was also aware of the historical context in which his match against Cilic will be played and was surprised by his sparkling form.

“Marking history here at Wimbledon. A big deal,” he said. “All my dreams came true here. Number eight (title) is unbelievable. It’s great but it doesn’t give me the title quite yet.

“I was extremely surprised in Australia,” he added. “The Australian Open (won) was such an unbelievable surprise and then to back it up in Indian Wells (won) and Miami (won). The first four months were like a dream really.”

And on it runs.