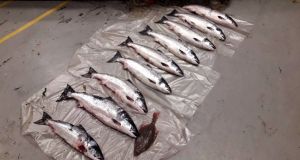 During the seizure, a firearm was discharged by the alleged offenders and while nobody was injured, members of An Garda Síochána attended the scene and the incident is being investigated.

David McInerney from Inland Fisheries Ireland, said: “The salmon caught by this illegal net were on the final leg of an arduous journey to reach their native spawning rivers. Having survived a journey from either the coastal waters off west Greenland, before being cruelly killed by an illegal net, a few miles from their final destination.

“It cannot be stressed enough that nobody should purchase wild salmon that does not carry either a green or white gill tag through the mouth and gill clearly displaying the name Inland Fisheries Ireland.

“I would like to highlight the dedication and courage demonstrated by the officers in tackling illegal fishing in the face of significant personal danger.”

Tagging regulations only apply to Ireland’s wild salmon and sea trout stocks. These stocks are in decline and subject to rigorous management and protection.

Members of the public can report incidents of water pollution, illegal fishing and fish kills by phoning IFI’s confidential number 1890 34 74 24 or 1890 FISH 24.

Although fishing conditions were far from ideal on Lough Sheelin, perseverance paid off for the chosen few with the heaviest trout by Michael Farrell at an impressive 8lb.

In total, 25 trout were recorded with the majority caught as dusk fell. Brendan Daly from Loughrea, Co Galway, caught five “night time” trout on Green Peter Sedges, between 3½ and 4½lbs while Peter Donoghue had no complaints with his 6lb catch. All fish were returned.

Over on Lough Owel, the Patti Doolan Memorial Shield competition on Sunday attracted about 20 competitors and while conditions were described as “perfect”, the catch return was poor, even with one fish per competitor limitation.

Stuart McGrane from Wicklow was the outright winner with a trout of 2.5lb caught at the “tyre” area on a Pearly Dabbler tied by Diego Leccardi.

On Corrib, Ted Wherry reported from Mayfly Lodge of Antoine and son Theo Bellanger catching their first Corrib trout of 4.2lb. Ted himself, along with Kevin Sheridan, fished five afternoons landing 12 fish, 10 of which were over 3lb.

In the Cornamona area, Tom ‘Doc’ Sullivan said when good conditions arose fishing was good. Brothers Paul and Gary Godwin fished for a day and boated five on dry mayfly. Ivor Trimble from Co Down had two fish on dry mayfly in testing conditions with his best around 2.5lb.

The charity competition in aid of the Irish Cancer Society scheduled for next Saturday (August 29th) on Lough Lene, Castlepollard, Co Westmeath, has been cancelled due to Covid-19 restrictions whereby outside gatherings of not more than 15 people has been introduced.

1 Jim McGuinness: There is a way to save championship and make it competitive again
2 Sordid murder of hurling brothers still resonates in south Galway
3 Ireland’s work-ons: Four things Andy Farrell needs to address
4 Big four ready to rumble on hurling’s special weekend
5 Ireland’s clash against Georgia will be an important audition
Real news has value SUBSCRIBE