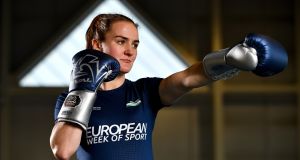 “Things change like the weather over here”, says Kellie Harrington, a suitably timed and apt reply to all that continuing uncertainty around next year’s Tokyo Olympics and what lies beneath. Who really knows?

Last month, one year out from the Games postponed into July of 2021, Harrington suggested she’d be content to walk away from boxing, if Tokyo didn’t happen by then; now, 11 months out, she’s changed that tune a little, maybe because no matter what happens there’s an added sense now of life outside of boxing. Maybe even some Rugby Sevens.

“I do say things, they just come out of my mouth sometimes, and I don’t think before I speak, I suppose,” she says. “I really don’t know what I’ll do if Tokyo doesn’t happen next year, if I’ll retire. We’ll just have to wait and see.

“We’re not even back sparring, [we] are meant to be back next week. The coaches just aren’t taking the chance at the moment. Most countries are back, then after that, we’re meant to be going to Germany in October, for a multi-nations tournament, but again things change like the weather over here. You just don’t know what way it will pan out.

“But if we get the Germany meet, that would be great, just looking for a performance, and the big one then will be the end of February, the start of March, back into the Tokyo qualifiers. That’s where everything has to be fine-tuned for, and hopefully be ready.”

“Exactly, watching that fight, I was thinking I’d love to be in there now, not just as a professional or anything, I just want to have a fight. [I] would love to be back in between the ropes, just to see where I’m at, and what I need to work on, and if what I have been working on [has worked].”

Not that a professional contract would automatically make sense at this stage of her career: she turns 31 in December, it might be a step too far, or too late. “If the money was right, and I had a nice contract with so many fights, maybe a three-year contract, with very, very good money, then I would turn professional. But if it’s crap money, and a crap contract, then I’m not interested. I can stay amateur, I’ve no need for that. Less stress, more success.”

Harrington hasn’t fought herself since January, the 2018 World Champion missing all the second half of 2019 after requiring surgery on her right thumb: that meant no European Games gold-medal showdown with Mira Potkonen; no European Championships in Spain last August, and no trip to Russia to defend her World Championship title last October.

“But it was a great tournament, great preparation for the Olympic qualifiers and then I got out to the Olympic qualifiers. I’d been watching my weight all week, it was a bit weird over there because we didn’t know whether the competition was going to go ahead or not. It was the 16th of March, I was to box on the 17th and I was making my weight and I got told then on the way back after doing my weight session that it was called off, ‘You’re going home tomorrow’.

At the height of the lockdown, she increased her workload as a cleaner in St Vincent’s Psychiatric Hospital in Fairview, experiencing for herself the frontline of the pandemic, although things are more back to normal on that front. If Tokyo does go ahead on a watered down scale she’s okay with that too.

“It suits me actually. I don’t want any of my family coming over to Tokyo, it’s too expensive for them, I wouldn’t like to put that pressure on them, to beg, steal and borrow to go to Tokyo. If it was watered down, it would take some pressure off me.

“Even if there’s no Olympics, I’d be interested in coming back, I’ve nine Elite Irish titles, I’d be interesting in coming back and getting another two Irish titles. International wise, I don’t know. I was joking the other day with my partner, she was like, ‘Where are you going?’ I says, ‘I’m going over here now and doing a trial for the Rugby Sevens’. She was like, ‘What?!’ I was like, ‘Yeah, yeah, they’ve asked me to come out on a trial’. She was saying, ‘You could definitely do that after boxing’ and I was like, ‘definitely’.

“It was just a wind-up, I don’t think I’d be able for that! But yeah, just going with the flow, I’m happy with where I am in my life.”

Kellie Harrington was speaking at the launch of European Week of Sport 2020 at the Sport Ireland Campus, from September 23rd - 30th, aimed at promoting physical activity in people of all ages, backgrounds, or fitness levels.