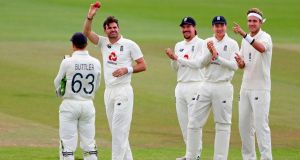 As the Test summer approached its final hour Jimmy Anderson cruised in once more. The skies were grey, the pitch was brown and the ball, 61 overs old, had lost its shine and its hardness. Azhar Ali, suddenly the man in form, was on strike and seeing the ball well.

There had not been much movement out there as Anderson delivered his 33,717th ball in Test cricket. To no one’s great surprise it landed on a length just outside off stump. But unlike so many of its predecessors in this game the ball seemed to gather speed and height off the blandest Test pitch of the summer. It took the edge of Azhar’s bat and flew quickly towards Joe Root at first slip. The England captain was not going to drop this one.

He tossed the ball high in the air and then abandoned any social distancing – they have been in their bubble a long time – as he embraced his senior bowler, who, unlike two nights ago after a trio of catches had gone begging, was beaming broadly.

The old union members, Stuart Broad and Chris Woakes, now surrounded him and the bashful smile was still there. He held up the ball to the empty stands and the photographers snapped away in the knowledge that their day’s work was nearly done. The great bowlers employed by Sky, Shane Warne (708 wickets) and Wasim Akram (414), came out on to their balcony to applaud.

Before too long the next man in, Asad Shafiq, had taken guard. Anderson was soon at the end of his mark. He turned, cruised in to propel his 33,718th delivery; it was on a length just outside off stump. Of course it was.

Anderson’s delight was a mixture of elation and relief. He has never sought the limelight and it was probably a blessing to get this landmark out the way with the minimum of fuss. One wondered what delighted him the most, reaching 600 or demonstrating to one and all that he is not finished yet. Probably the latter.

This has been the most testing surface for pacemen in the series, especially when the ball grows old, and Anderson, in his 39th year, has been the most effective of all of them. Hence the notion of saving him for home Tests only does not have that much cricketing logic.

However, that is for another day. England do not know yet where they will be playing their next Test. Aside from Anderson’s landmark, this one petered out with the minimum of drama. Play could not start until 4.15pm, which gave England a potential 42 overs to find Anderson a wicket and win the game. The former was always going to be the easier task.

Azhar was unfortunate to receive the only ball to misbehave on Tuesday. Without his efforts in the first innings Pakistan would have lost the match. Moreover, he has led a side who have battled in alien conditions both on and off the field throughout the entire series. It transpired that the outcome was decided by a dizzy partnership on Sunday in Manchester when Jos Buttler and Woakes turned the tables on the final afternoon of the first Test.

Pakistan could easily have ended up winning this series 1-0 since they were favourites to prevail in that match on the Sunday morning, which serves to emphasise the talent in Azhar’s side and the scope for them to become a major force at Test level. Greater impetus can come from the increasing chance of more Test cricket being played in Pakistan, with England now one of the likelier sides to tour there soon.

At the moment Pakistan’s bowling is more potent than their batting though there was time for Babar Azam to demonstrate his undoubted class with some wonderfully crisp strokeplay during his unbeaten 63. He should adorn world cricket for a decade.

Shafiq fell to Root’s off-spin in the approved manner, caught off bat and pad at short leg by the substitute fieldsman, James Bracey. Anderson bowled a couple of overs with the second new ball but then the players decided to call it a day and there were warm fist pumps and also some end-of-bubble handshakes between the sides.

Like West Indies before them, Pakistan’s cricketers have decorated an extraordinary summer in which we have been reminded, despite the pandemic and the downpours, that Test cricket can produce captivating drama that the other forms of the game struggle to match – as well as some memorable little moments. On Tuesday we had to be satisfied with one of those moments. - Guardian