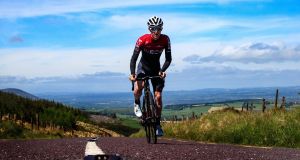 We set up a call for about six o’clock on Sunday evening, and at exactly one minute past Eddie Dunbar rings me. This may or may not be his usual punctuality but either way he’s off to a good start.

“Just finished on the bike, after a quick shower, and thought I’d ring you in case you were trying to ring me,” he says, gently putting my lazy afternoon into its place. Turns out he’s just finished another 30 hours on the bike for the week, and he’ll have finished 120 by the end of the month. You do the maths.

Dunbar is calling from the family home in the village of Banteer in north Cork, and at times the line isn’t great; which is okay, because over the next hour he talks slowly and considerately, often pondering each question with a quick “Eh . . . ” – all in direct contrast to the typically punchy, aggressive style of riding which has won him so many plaudits during his swift rise through the peloton.

The call is prompted by the idea that had world not gone into lockdown, Dunbar would this week have been riding into the last seven stages of the Giro d’Italia – last Saturday also being one year to the day since he took third on the 158km Stage 12 into Pinerolo, ending up 22nd overall in his first Grand Tour, still only 22 (and only given the call-up a week in advance after Ineos team-mate Egan Bernal broke his collarbone).

“Yeah, I was down for the Giro again, that was to be a big part of the season, for me. So trying to match some of that, more or less, and with the weather being so good, riding as much as possible, building up the hours, without the same intensity of the Giro, obviously.”

Dunbar was riding with Team Ineos in the UAE Tour, the last week in February, inside the top 10 at one point, before that race was cancelled outright with two stages remaining – one the first sporting casualties of coronavirus. Not long after that, back at his training base in Monaco, he decided to come home to Banteer, which would at least afford him the chance to ride within a 2km radius of his home, since extended to 5km.

“Not a bad part of the world to be in lockdown, just here with my mother and my sister. With no racing, you didn’t want to be training yourself into the ground every day, but France and Spain were going into a stricter lockdown at that point, you couldn’t really even leave your home. Here it’s been manageable, the weather being the way it is helps. And the longest period back home in a long time. You’re normally not more than two or three weeks in the same place, between races, training camps, holidays.”

All this hasn’t necessarily put some deeper meaning or fresh perspective onto his cycling career; Dunbar has already been there, done that, after a head-planting crash onto the road inside the final 1km of day one of the Baby Giro, in June 2017, resulting in a severe concussion which left him almost five complete months off the bike.

“That’s when I kind of realised I was living in a bit of a bubble, with cycling, and got a little lost. You call your friends, and realise they were off in college, or my girlfriend, who was off in Spain. I very close to quitting, a couple of weeks away maybe, had become a bit too strict about it, racing all the time, no real escape outside of cycling. I really thought I was done with it. It wasn’t a positive time in my life, and I realised I had to change a few things to enjoy the sport again.

“There are still some side effects to the crash, and I have to be very aware if I hit my head again. That definitely shook me up as a person. It opened my eyes to a few things, made me realise there is more to life than riding my bike. And that I’m not always going to be a cyclist. But I know some of my friends thought I was gone. One or two of them said I’d be stupid to give it up. Like, ‘what else was I going to do?’ Which was fair enough.”

Truth is Dunbar doesn’t consider himself a deep fan of the sport, not in the historical sense anyway, and still prefers to watch rugby. He did once do a primary school project on Lance Armstrong, winning a prize for his efforts, but expresses no desire to watch the latest documentary effort on ESPN.

“We had to pick a famous person, in school, and I picked Lance. It was an incredible story, to some, and maybe at that age you do take some inspiration from it. But Lance will always be dragged up, 10, 15 years’ time, will keep coming up. I just focus on my own goals, and what I want to achieve in the sport. But I was still so young, 11 or 12, so being perfectly honest I probably didn’t even understand it, at that age. I just wanted to stick what I was doing, which was winning under-13 races.”

Back then he was also playing rugby with Sundays Well, guided into that sport by his late father Eamonn, who died of a progressive kidney disease when Dunbar was only 13: “We’d head up to Musgrave Park every Saturday morning, for eight years, and I really enjoyed it. Rugby was a different mentality, more that team mentality, but it taught me great discipline, and there was a real will to win among the guys there, even at that age.

“I played mostly scrumhalf, or the odd time at outhalf, and I still love the game, watch more rugby than cycling, still go to the few Munster games, when I can. Maybe further down the line I’d like to get back involved coaching with rugby, maybe. That’s a bit away. But I remember after my last game, at under-15, I could already see myself getting better at cycling. With rugby, that was when size was really coming into it, it was becoming more physical, and even at under-15 the size of some guys was incredible, that was my view on it. Then after my Leaving Cert, I really saw the opportunity with cycling, and decided I’d go for it.”

It was after the sudden collapse of the Aqua Blue Sport team, mid-season 2018, that Dunbar was invited to join Team Sky, now Team Ineos, to ride alongside the likes of Chris Froome, and Geraint Thomas: they’ll be the team riders at the Tour de France, now set to start on August 29th, leaving Dunbar with his chance to shine again at the Giro, now set for October 3rd-25th.

“We’re certainly hoping we’ll be racing this year, with whatever restrictions the UCI need to put in place, to keep it safe, and healthy. But I think come August, I’d feel quite comfortable to race my bike, I don’t see any issues, as long as it’s safe for the riders and spectators.

“After Aqua Blue collapsed, things could have gone either way again, before Sky gave me the opportunity, and I was racing again with two weeks, in Italy. It all happened so quick, but it’s been really, really good for me, to be on one of the best teams in the world. We have respect for all the guys on the team. But I never get carried away by who they are, or what they’ve done. They all work incredibly hard, are all there to help, and are all very, very competitive.”