Race had 30,000 entries and was originally due to take place this Sunday in Dublin 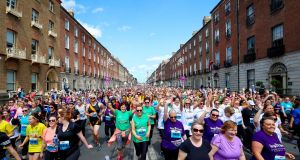 Organisers have confirmed that the Women’s Mini Marathon will not be rescheduled for this year. Photo: Tommy Dickson/Inpho

Organisers of the 2020 VHI Women’s Mini Marathon have now announced the outright cancellation of the eent, deciding it was no longer possible to reschedule for later in the year as was initially hoped.

Originally set for this Sunday, May 31st, with over 30,000 entries already submitted and set to benefit over 1,000 charities, the organisers are now planning a ‘virtual’ run instead, the details of which will be announced in the coming weeks.

“The health and safety of our participants is always our highest priority, and this tough decision was made with their wellbeing foremost in our minds”, said David O’Leary, the event General Manager.

“We fully support the Government’s measures to combat Covid-19 and to protect lives, and we have an enormous responsibility, not only to our participants, but to the many hundreds of charities, volunteers, supporters, partners, suppliers – and the residents of Dublin city – who play such an important part in making our event a success. While we are very disappointed to make this decision, unfortunately it will not be possible to run our event in a safe manner this year.

“In recognition of the hundreds of charities that depend on our event for a significant part of their fundraising efforts, we have joined together with our title sponsor Vhi to create a special Virtual Race. We have very exciting plans and we will be announcing full details in the coming weeks.”

All entries for the 2020 event will be valid for the 2021 Vhi Women’s Mini Marathon. Alternatively, there will be a full refund option offered, with details available at www.vhiwomensminimarathon.ie.

It follows Tuesday’s announcement that the Dublin Rock ‘n’ Roll running events were also postponed from this August to August 2021. That four-race series – half-marathon, 10km, 5km and family fun run – was scheduled to take place in Dublin on the weekend of August 8th/9th; the event, organised by the US-based Rock ‘n’ Roll franchise, also included the Athletics Ireland National half-marathon, which will also not now take place on that date.

With over 10,000 runners expected, concerns around social distancing in the face of Covid-19 meant the event was unable to go ahead, and is now due to return on the preliminary dates of August 7th/8th 2021.

Last week, organisers of the 2020 KBC Dublin Marathon also confirmed the cancellation of their entire race and countdown race series, deciding that after exploring the many alternatives for running the events safely, “ultimately none were viable” in the face of Covid-19.

The 41st running of the event, which had been set for Sunday October 25th, was a 25,000-entry sellout, the organisers announcing that capacity back in January after introducing a new part-lottery entry system. All entries for the 2020 race and countdown series of four races will also be valid for the 2021 races. For those who do not wish to avail of this, a full refund option is available.