Four-race series was expected to attract more than 10,000 runners on August 8th-9th 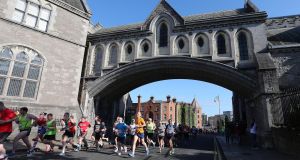 Organisers of the Dublin Rock ‘n’ Roll running events have confirmed the postponement of the entire race series this coming August into the month of August 2021.

The four-race series - half-marathon, 10km, 5km and family fun run - were scheduled to take in Dublin on the weekend of August 8th-9th; the event, organised by the US-based Rock ‘n’ Roll franchise, also included the Athletics Ireland National half-marathon, which will also not now take place on that date.

With more than 10,000 runners expected, concerns around social distancing in the face of Covid-19 meant the event was unable to go ahead, and it is now set to return on the preliminary dates of August 7th-8th 2021.

In a statement the organisers said: “In what has been a continually evolving and challenging time globally, we recognise that the postponement may come as a disappointment. While we are prevented from holding the event on the original date, we are looking forward to providing you with an exceptional race experience in the future.”

Last Tuesday, organisers of the 2020 KBC Dublin Marathon also confirmed the cancellation of their entire race and countdown race series, deciding that after exploring the many alternatives for running the events safely, “ultimately none were viable” in the face of Covid-19.

The 41st running of the event, which had been set for Sunday October 25th, was a 25,000-entry sell-out, the organisers announcing that capacity back in January after introducing a new part-lottery entry system. Such is the ever pressing interest for race entries they received just over 35,000 applications in all.

All entries for the 2020 race and countdown series of four races will now be valid for the 2021 races. For those who do not wish to avail of this, a full refund option is available.

Galgorm Castle resort could rescue 2020 Irish Open 11:25
Iain Henderson out for up to 10 weeks after hip surgery 10:26
Leeds sign teenager Charlie Allen from Linfield 10:08
Celtic launch investigation into player’s secret trip to Spain 12:40
Relieved Solskjær says he’s prepared for either Sevilla or Wolves 07:50
Here is your handy guide to sport on television this week