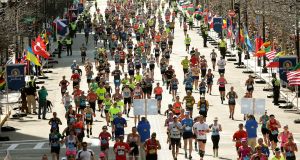 The 2020 Boston Marathon has been cancelled - the first time the race has been called off in 124 years. Photograph: Mike Lawrie/Getty

The Boston Marathon, originally scheduled to be held in April and then postponed until September because of the Covid-19 pandemic, has now been cancelled for the first time in its history, organisers said on Thursday.

The race, held annually since 1897, is the world’s most prestigious marathon and generally draws over 30,000 runners from all over the world.

“Our top priority continues to be safeguarding the health of the community, as well as our staff, participants, volunteers, spectators, and supporters,” Tom Grilk, chief executive of the Boston Athletics Association, which manages the Boston Marathon, said in a news release.

Boston Mayor Marty Walsh said on Twitter the race, whose field attracts decorated professionals and Olympians to amateur runners, was not feasible this year.

“While our goal and our hope is to make progress in containing the virus and recovering our economy, this kind of event would not be responsible or realistic on September 14 or any time this year,” said Walsh.

The 26.2-mile race (42km), which extends from the suburb of Hopkinton to downtown Boston, is the first of the six World Marathon Majors to be cancelled due to the coronavirus outbreak, which brought live sports to a standstill in mid-March.

The Tokyo Marathon went ahead on March 1st with elite runners only, London was postponed to October 4th from April 26th and Berlin organisers said the race will not got ahead in September but did not specify if it would be postponed or cancelled altogether.

The Chicago Marathon and New York City Marathon have not announced any changes to hold their events in October and November, respectively.

The 2020 Dublin Marathon has also been cancelled.

The 2021 Boston Marathon is scheduled for April 19th.