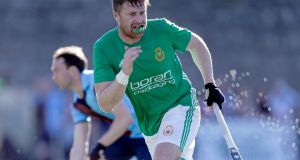 Corinthian coach Joe Brennan in action for Glenanne in 2018. Brennan is targeting a top-four place with his Corinthian this season. Photograph: Laszlo Geczo/Inpho

Corinthian coach Joe Brennan is ambitious to see his side’s mindset switching to a pursuit of the top four places rather than simply trying to avoid relegation this term.

It follows their dramatic 4-3 win over high-flying UCD – who the reds were promoted with last spring – courtesy of Ian Stewart’s winner.

The win followed hot on the heels of a 4-4 draw with reigning EY Champions Trophy holders Three Rock Rovers, showing a much greater attacking outlook.

Those results have put a healthy gap between Corinthian and any immediate relegation trouble at the halfway stage and Brennan says it is time to look at loftier ambitions.

“They’re learning at an incredible rate and are so hungry, taking on any sort of knowledge myself and Peter [Caruth] can give them,” he said of the win. “They keep pushing on and hopefully we can now put ourselves in the hunt because I want to battle for top four rather than just staying up.

“We’ve shown ourselves as being hard to beat but maybe it’s important to change the mindset.”

Early goals from Glenn Holmes and David Howard saw them flying at 2-0 up only for a Conor Empey double and one from his younger brother, Ali, to swap the lead at 3-2.

Olympian Caruth – a player-coach with Corinthian – levelled before Stewart nailed his fourth goal in a week for all the points.

Brennan was also indebted to goalkeeper Charlie Henderson for his performance, stepping in to solve a goalkeeping crisis.

“We were lucky enough to be able to call on someone of Charlie’s calibre. While he is not the youngest [he turns 40 this week] and hasn’t played in five years, he is such a great guy to have around. He does the basics so well in goals and is a big, positive character so you couldn’t ask for someone better to do what he has done for us.”

Elsewhere, it was away wins all round as leaders Lisnagarvey survived an almighty scare to beat YMCA 3-2. YMCA led 2-0 thanks to Ross Henderson and Tom Power goals in the first 13 minutes but an Andy Williamson double and a rare winner from Mark McNellis earned the points.

That keeps them five clear of Monkstown who hammered Annadale 6-0. Three Rock Rovers were too strong for Pembroke in a 5-2 victory and Banbridge swept by Glenanne 7-4 thanks to six first-half goals.