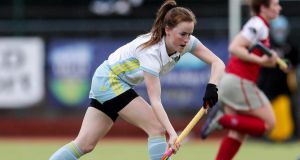 Emma Russell in action for UCD in 2018. Russell scored a goal in Alexandra’s 2-0 win over Pegasus on Saturday. Photograph: Laszlo Geczo/Inpho

Loreto fought back from a goal down going into the final quarter of their game away to Cork Harlequins on Saturday to collect their sixth win in a row in the Hockey League and to move three points clear of Pegasus and Old Alexandra at the top of the table.

A trio of Barrys combined to give Harlequins a second-quarter lead, Rebecca deflecting home Michelle’s cross from Nikki’s long corner, and they maintained that advantage until the final period when goals from Sarah Torrans and Siofra O’Brien turned the game on its head to give Loreto the points.

And they now have sole ownership of top spot in the table after Alexandra inflicted on Pegasus their first home defeat of the campaign and only their second of the season. Emma Russell and Rebecca Evans put the Dublin side 2-0 up at Queens before Kerri McDonald pulled one back for the defending champions, but Alexandra held on to move level on 19 points with Pegasus.

UCD stay fourth after their 3-0 win over Railway Union, Hannah McLoughlin and Lena Tice converting short corners before Edel Nyland completed the scoring with her first goal for the students.

Pembroke Wanderers’ hopes of closing the gap on the top four were thwarted by a late equaliser from Catholic Institute at Serpentine Avenue, Ciara Moloney turning home a short corner in the fourth quarter after Emily Beatty had given Pembroke an early lead.

Muckross suffered even more frustration on their visit to bottom club Belfast Harlequins who they led 3-1 before late scores from Katherine Welshman and Julie Dennison gave the home side just their second point of the season.