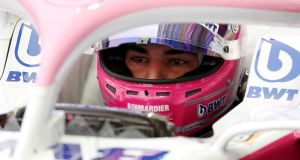 Racing Point will become the Aston Martin factory Formula One team from 2021 after their Canadian billionaire owner Lawrence Stroll bought into the ailing British sportscar maker on Friday.

Under the deal announced on Friday, Stroll will pay £182 million for a 16.7 per cent stake in Aston Martin which could rise to 20 per cent. He will also join the board as executive chairman.

The Silverstone-based team has changed identity repeatedly since it was founded as Jordan in 1991.

They were known as Force India before collapsing into administration in 2018 under the ownership of troubled Indian liquor tycoon Vijay Mallya and before that Spyker and Midland.

Stroll is the father of 21-year-old F1 driver Lance, who joined Mercedes-powered Racing Point last year from Williams and has Mexican Sergio Perez as team mate.

Aston Martin said in a statement that the agreement with Racing Point, who finished seventh overall in 2019, was for an initial 10-year term and the carmaker “will receive an economic interest in the team”.

“The agreement also includes a sponsorship arrangement from 2021 and for the subsequent four years with commercial terms commensurate with the company’s current annual F1 expenditure,” it added.

This was renewable for five years, subject to satisfying certain conditions.

A technology partnership between Aston Martin and Red Bull Advanced Technologies will continue until the Aston Martin Valkyrie hypercar is delivered.

Red Bull said the first batch of the 150 road-going cars were due at the end of this year.

“Red Bull Racing has agreed to release Aston Martin from its Formula One exclusivity clause which in turn has allowed it to generate the necessary investment required to refinance and pursue alternative opportunities within the sport,” Red Bull said in a statement.

Stroll, who made his money through fashion brands such as Tommy Hilfiger and Michael Kors, has been involved in motor racing for years and owns Canada’s Mont-Tremblant circuit in Quebec as well as a collection of classic Ferraris.

Aston Martin, a 107-year-old firm whose road cars are closely associated with fictional British secret agent James Bond, competed in Formula One with a factory team in 1959 and 1960 with a best result of sixth. – Reuters