Featherweight to make pro home debut in Belfast on Saturday 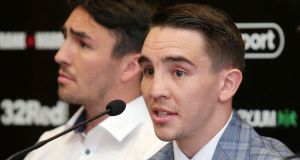 Michael Conlan talks at a press conference ahead of his fight against Brazilian Adeilson Dos Santos in Belfast on Saturday night. Photograph: Jonathan Porter/Inpho/Presseye

The Olympic Games continue to play on the mind of Ireland’s only male amateur world champion Michael Conlan.

But Conlan is already calling out his Olympic medal nemesis, Vladimir Nikitin, who he hopes to fight some time next year.

The bloodied Russian, who ended Conlan’s Rio hopes in 2016 in the most controversial of circumstances after which the 26-year-old called amateur boxing “corrupt”, has signed professional papers with the Top Rank organisation.

“I want that rematch with Vladimir Nikitin who got that decision in the Olympics and now Top Rank have signed him, it will happen,” said Conlan on Thursday.

“They went out of their way to sign him because it has to happen.”

The 26-year-old has not boxed professionally in Belfast, his 7-0 with five KOs record coming in the US and Australia.

“I’m delighted to be back. It is a long time since I have boxed here and getting in front of that crowd will be a huge buzz. Once I walk out there it is game time and I’m ready to go. I have had support from all over the world since Rio,” added Conlan.

“Top Rank have done a great job and made New York feel home from home.”

It is widely agreed that Dos Santos is the toughest opponent Conlan has faced and a lot of eyes will be on how he deals with the greater threat from a boxer who last year fought for the World Boxing Organisation World Super Bantamweight title, losing by KO to Jessie Magdaleno.

“Dos Santos is a big puncher who is dangerous when he throws hooks and it’s a step up,” said Conlan.

“If I was fighting a nobody fans wouldn’t come. I will have an assassin’s mentality and will be destructive. There’s hype around me but I won’t let it get to my head.”