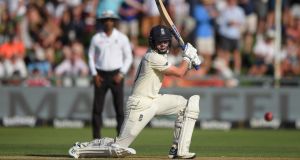 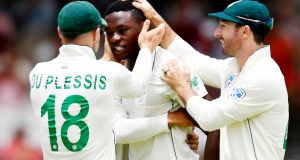 Here is a tale of missed opportunities which heightens the eerie feeling that England are now embarked on a nightmarish tour of Ashes proportions. Here was the chance to lift the spirits despite all the setbacks of the past fortnight. The sun shone blissfully upon Newlands, which was packed to the rafters, Table Mountain had its fluffy hat on and England won a good toss on a good wicket. Yet the scorecard demonstrates how horrendously they missed the chance to ignite their tour.

Look down the list which reveals that England were 262 for nine at the close. With the exception of Zak Crawley, the man called in to replace Rory Burns, six batsmen scored 29 or more yet just one of them, Ollie Pope, was capable of reaching a half-century – and he had to rely upon the last man Jimmy Anderson hanging in alongside him to reach this landmark. Pope was the solitary shaft of light for England, solid at the start of his innings and improvising impishly when in partnership with Anderson at the end.

That ugly scorecard reinforces the fact there were no demons in the pitch. It was relatively straightforward for batsmen to bed in. Yet the turmoil that has afflicted the tour party – a nasty flu epidemic followed by a conventional elbow problem for Jofra Archer and an exasperating ankle injury to Burns when playing football on Thursday – was now reflected in their batting.

Several hinted at domination on a far more inviting surface than the one they experienced at Centurion; their silky cover drives slid easily across the turf and then they got out. The South Africans could hardly believe their luck. They just sat back and waited for the error. They did not have to wait long. Five wickets fell in a grim final session for England – except for a sparky last-wicket partnership of 28. This outcome that must have been beyond the expectations of Faf du Plessis when he lost the toss.

Crawley and Dom Sibley became England’s first right-handed opening pair since 2002, when Michael Vaughan and Robert Key were in harness against India. Both achieved their career-best scores for England but this was not really the trigger to hang out the bunting. Crawley mustered four before he became another Test victim for Vernon Philander. Forward he pushed to yet another length ball and an outside edge carried conveniently to the keeper. Perhaps the delivery was a little too wide to defend.

Sibley looks reminiscent of Key at the crease with his sturdy frame and pragmatic approach. Here he impressed again though not for long enough. In contrast to his second innings at Centurion there were a couple of cover drives in addition to the more familiar and reassuring clips off his leg.

Then having reached 34 impressively he also edged a straightforward catch to the keeper off Kasigo Rabada. England fans do not wish to watch any more repeats of the Nicker of Sibley. Once again he had promised more than he delivered despite looking at home for over an hour and a half.

Joe Denly and Joe Root tantalised in their different ways. Denly had to battle, as usual. At one point he faced 48 balls without scoring but this did not seem to trouble him too much. By contrast Root purred along, punching the ball behind square on the off side and picking up singles easily compared to his colleagues.

Yet neither could deliver the significant innings. Root’s serenity suddenly disappeared when was on 31. He was dropped by Rassie van der Dussen at first slip when driving at Anrich Nortje; then two balls later he tried to avoid a bouncer with his hands held high. The ball touched his gloves and ballooned gently to Quinton de Kock, whereupon Root walked off without waiting for any confirmation from umpire Paul Reiffel.

Next Denly departed in a frustrating manner, bowled through the gate by the left-arm spin of Keshav Maharaj when playing what appeared to be a copybook forward defensive stroke – in fact the bat was too far in front of his pad.

Denly has an odd record for England. In 22 innings he has failed to reach double figures on only three occasions, but he has exceeded 53 just three times. In one sense this is encouraging since he has the capacity to get started; in another it is infuriating he has not been able to consolidate those starts often enough. Especially in the absence of Burns, Denly becomes an important presence at the top of the order. He has to supply the glue.

For a while Ben Stokes provided some sparkle. Like Root before him he appeared to be in complete control, pulling the pacemen, popping a drive against Maharaj into the stands at long off. There was even his version of MS Dhoni’s helicopter shot against the spinner and the ball sped to the square-leg boundary.

Then to general consternation and his own obvious dismay – it took an age for him to drag his body from the crease – he somehow sliced a drive against Nortje to Dean Elgar at extra cover. Stokes and Root are both experiencing the torment of being in very good touch without scoring many runs. This is a blow for the tourists given they are obviously England’s best players.

Jos Buttler looked as if he had reread the message on the end of his bat handle and unveiled some glorious strokes, the longest of which reached a building site at long-on, but after a pronounced shuffle against Dwaine Pretorius he was caught behind – whereupon two of the nippers, Sam Curran and Dom Bess, departed in swift succession. England have never fielded a side with four men younger than 23 years of age; they are Crawley, Curran, Bess and Pope and only the latter ended the day with any happy memories or a reputation enhanced. – Guardian

1 Sonia O’Sullivan: Taming The Tan gave us one last roll of the dice before shutdown
2 Final record attempts before lockdown; underage rugby feeling the effects
3 America at Large: On Long Island, longing for a return to our field of dreams
4 Reality Bites – Tales from the new normal: Shane O’Donnell
5 Leona Maguire knows staying put was the right choice as rookie season halted
Real news has value SUBSCRIBE

Final record attempts before lockdown; underage rugby feeling the effects 06:59
Premier League stress to PFA that players need to take pay cuts 06:34
Reality Bites – Tales from the new normal: Shane O’Donnell 06:30
Sonia O’Sullivan: Taming The Tan gave us one last roll of the dice before shutdown 06:15
Ireland’s underage rugby stars miss out on chances to shine at Easter 06:18
Here is your handy guide to sport on television this week