Sonia O’Sullivan: Mental and emotional forces the test in Japan 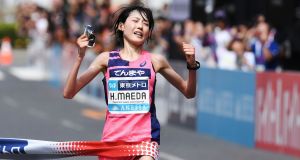 You don’t have to be anywhere near Japan to sense the hype and anticipation around the Rugby World Cup. I sense it may actually be bigger back in Ireland than it is here in Australia, and you expect the host nation will also be properly fired up tomorrow when they take on Russia in their opening game in Tokyo.

Rugby in Japan still feels like a strange fit, a least compared to sumo wrestling or baseball, but soccer grew in popularity after the shared hosting of the World Cup with Korea in 2002. It is likely that rugby will be more popular in Japan by the end of this tournament.

The Japanese have been preparing for this World Cup meticulously for 10 years, and one of the games I’m most looking forward to is Ireland against the hosts on September 28th. It may not be as straightforward as one might think, even with Ireland ranked No 1 in the world, Japan at No 10.

There was also a sort or prelude to the popularity of sport in Japan last Sunday when they shut down the streets of Tokyo to stage the Grand Marathon Championship. This doubled as the Japanese Olympic marathon trials for Tokyo 2020, the first time they have ever held such an event, and it was an accomplishment in itself to get a place on the start line. To qualify Japanese men had to run one marathon under 2:08.30 or two marathons with an average of 2:11.00

The Japanese are passionate about marathon running, a sport they love to dominate and see themselves as world leaders, with close to 70 men faster than anyone in Ireland this year and 48 women.

It could prove more difficult to make the Japanese marathon team than it is to win an Olympic medal. This is also the one event in Tokyo where Japanese athletes will be expected to deliver. There appears to be a similar level of expectation on Ireland to deliver at this World Cup, maybe greater than ever. It seems the only other team that is getting anywhere near the scrutiny and extensive media build-up is New Zealand, who have lifted the Webb Ellis trophy on three occasions, more than any other country as we approach the ninth edition of the tournament.

There will always be favourites and headlines going into major sporting events. Even though many of the favourites come out on top, it’s always a topic for debate how the pressure and expectation gets to them, especially as the importance of the result increases.

This in turn affects players and teams. Will they run through the things they practice every day and deliver as normal, or crumble under pressure?

It not just what you pick up on social media but all around when an athlete or team is building to a major event. It’s like a big test to see how well they can hold it together; every sniffle, ache or pain causes a bit of a freeze and extra tension.

Perhaps at the peak of performance athletes are that bit more acutely aware of how they feel, and are always fearful that some hurdle will fall in their way.

I know I had a few undulations throughout my career on some of the biggest stages. There were plenty of ups and downs, and the Olympics is the hardest to manage. Like a World Cup, you just knew that everyone was upping their game to qualify and then to perform. It was easy to fall into the trap of looking to push harder.

You can be lucky and unlucky, and then you realise you have to create your own luck. So stick to what works like clockwork the day of a race: what you eat, how you prepare before leaving for the stadium – normality and relaxation the key.

And surround yourself with familiar faces that know when you enter the zone they can just blend into the background.

We all know the best way to prepare is to try to be as normal as possible, break the big picture down to the simplest way you know without trying to complicate things or question everything that has worked in the past.

There is always the nagging thought, “I can do one more thing to be better”, when all you need to do is to stick to what you know and believe in everything that has worked before.

This is when the mental and emotional forces come into play. So many sports people allude to it comes down to who is best mentally prepared to line up and compete in the same fashion they would in their home track or stadium.

It’s something everyone has to deal with, breaking down the enormity of the challenge that lies ahead to deliver the result they are physically capable of, a performance they can stand behind.

Rugby is one sport where preparation and detail can be everything, to make sure players line out confident in their own ability and game plans. They need to be able to follow through and create momentum early in the game, then physically and mentally hold on.

There is so much more than just passing the ball and running down across the try line to be the best team in the world.

You would wonder, with all the extra knowledge and technology available to athletes across all sports, if it is easier to line up knowing how well prepared you are. There are so many checks along the way.

Even with all the preparation – physical, mental, nutrition, logistics, tactics, special shoes and methods of recovery – the human emotional element is still the one variable that can change everything.

The ability to line up, believe in yourself and your preparation and not be affected by everything going on around you is the key to delivering the required performance on the biggest stage.

I always thought it would be easier to be part of a team, but that is 14 more personal variables that need to be aligned. It may be easier to just run along by yourself, a master of your own destiny.

Typically, it comes to that moment when everything just falls into place and the exertion feels effortless, like you are at one with what you are trying to achieve. For all the noise and excitement, it’s a serenity and calmness that allows for the greatest result, above and beyond anything that seems possible. That X-factor is not quantifiable or predictable, and delivers the best sporting victories.

We are about to find out how much of that X-factor is in this Ireland rugby team.