Murray expects to be fit for Wimbledon 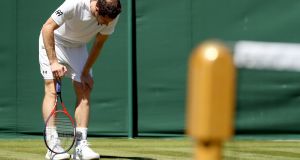 Andy Murray says he will “most likely” be fit for his first-round match at Wimbledon on Tuesday. The two-time Wimbledon champion has had just three matches since his return from long-term hip trouble, and has been battling to reach full sharpness in time for the tournament.

The 31-year-old will face France’s Benoit Paire in the first round at SW19 — a repeat of the fourth-round tie he won in straight sets last year. Murray had surgery on his right hip in January and only returned to action at Queen’s on June 18th, when he lost to Nick Kyrgios.

“I feel alright, not much different to how I felt two days ago really,” Murray said on Friday. “I’ll chat to my team this afternoon and also see a bit how the next two days go.

“I’m playing sets and stuff tomorrow, and then yeah, but most likely yeah, I’ll play. The thing is I obviously don’t know every single day how things will be. I need to play it a little bit by ear.

“I can’t predict how I’m going to feel in two days. But if I feel like I do today in a couple of days, I’ll be playing.”

Murray overcame Stan Wawrinka at Eastbourne on Monday, only to lose in straight sets to Kyle Edmund in Wednesday’s second-round clash.

Murray’s reward for victory over Paire would be a likely second-round meeting with Denis Shapovalov, while Juan Martin Del Potro could prove a testing third-round clash.

“I guess obviously I could have played one of the top players in the world,” said Murray, unseeded this year after his protracted injury absence.

“But at this stage where I’m at in the first round, it’s tricky for me. He’s a very talented guy, I played him last year in the fourth round. So he’s tough to play.”

Reigning champion Roger Federer meets Dusan Lajovic in his opener, while Rafael Nadal takes on Dui Sela. Fit-again Wawrinka and Grigor Dimitrov have been thrown together in what is likely to be one of the most eagerly-anticipated first-round clashes, while Djokovic will meet Tennys Sandgren.

Kyrgios is up against Denis Istomin and Marin Cilic takes on Yoshihito Nishioka.

Glory game sweet solace for Gündogan as he copes with lockdown loneliness 21:30
Harry Maguire unlikely to be summoned to court for appeal in Greece this year 21:20
Gordon Elliott’s horses will be able to race at Cheltenham under new trainer 21:08
Keith Duggan: Bloodlust for Elliott revenge seems shrill and suspect 18:39
Full text of the decision of the IHRB referral hearing into Gordon Elliott 18:21