Chloe Watkins: Third time lucky for Olympics is the goal 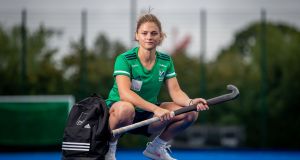 Irish hockey player Chloe Watkins: ‘Every time we go out there we want to try and perform. We do know we have a special group of players and a great programme.’ Photograph: Morgan Treacy/Inpho

Training Sunday, Monday and Tuesday full-time; working Wednesday, Thursday and Friday in Mazars. Whatever way it cuts, Chloe Watkins works a six-day week. It has had to come to this after the World Cup summer of last year that changed everything and exploded the previous notion of “can’t do”.

A transformative silver medal in London, and Watkins is not hiding from past Olympic misses, which might have easily settled into scar tissue. Instead she thinks: what an opportunity. What an opportunity to play Canada back-to-back in November for a place in Tokyo next year.

After missing out on the London Olympics and Rio 2016 by fractions, what an opportunity in two months’ time in a converted rugby stadium in Donnybrook to make count her third attempt at becoming an Olympian.

In 2012 the Irish team reached the final of their Olympic qualifying tournament but lost 4-1 to Belgium. London fell out of reach. For Rio, Watkins and the team lost out in a penalty shoot-out against China. That was even harder.

“We’ve turned that into motivation,” she says of missing and missing. “It took us the guts of a year to get back to reality. Now it’s just a motivating factor. People have been in the squad for 10 years. It’s something we’re all working towards and something we’ve always wanted to achieve. And this is our chance. When you’re with a group like this, you never know how many opportunities you’re going to get again, so we have to make the most of them.

“This will be my third attempt at an Olympics. Back in 2011, we were in a centralised programme. But nothing to this level of professionalism. The training itself, we’ve had nothing of this kind of intensity. I know everyone’s bodies are in bits at the moment as we were just back. It’s certainly a new level that we’re playing to and that’s what we need.”

For a time after their World Cup run the Irish team became a metaphor for what could be achieved with big heart and little resources, a mini-army of high-achieving women, who in a glorious few weeks in August cut it at global level. For some time after that, the fear was the fall back to earth would hurt, that the sport would fail to seize the moment.

Park Developments coming on board has been a huge boost, in combination with Softco

There was a partial unravelling and the loss of coach of the year Graham Shaw to New Zealand. But once again the team are promising to bend the ear of the Irish public and take their sport beyond the traditional confines of interest. No Irish field sport has ever qualified for the Olympic Games. After the World Cup final, it is again within touching distance.

“Canada have improved a lot over the last few years,” says Watkins cautiously. “They’ve got a good programme and been based more in Europe. We know they’re a good team and we’ve had a few mixed results. Like before the World Cup last summer we lost to them and then we beat them. Overall, we’re going in the right direction.

“Park Developments coming on board has been a huge boost, in combination with Softco. It has allowed us to train on a more full-time basis since July. We’re already seeing huge improvements as a team because it’s just that contact time we never had before. Now we have the ability to do that. That’s invaluable and certainly, over September, October, the programme we have in place will give us our best chance of qualifying.”

She knows the Dutch are the benchmark at world level but also that the 10 teams below the Netherlands can beat each other on a given day. Similarly, with Ireland ranked at eighth in the world and Canada 15th, so too can teams outside the top 10 beat sides with FIH world rankings in single figures. Canada comes into that reckoning.

But coming fifth at the recent European Championships, with a 2-1 defeat to England, a draw against Germany and wins against Belgium, Russia and Belarus, was a reinforcing trip to Antwerp. The difference between the current Irish team and the previous is they believe the can beat Germany and England, who through Great Britain are effectively the Olympic champions.

We made history at the World Cup, and the Olympics have been the one we’ve always chased

“You learn something different from each cycle,” says Watkins. “There have been some really big disappointments. But we’ve grown and I think we’ve got a really good mix of experience and youth. The energy and the ambition from some of the younger players . . . they’ve slotted in seamlessly. Some of us who have been disappointed before with Olympic qualifiers know what to expect and what not to expect. Just because you feel you deserve it doesn’t always make you get there in the end. We’re well aware of it.

“We made history at the World Cup, and the Olympics have been the one we’ve always chased. We’ve never qualified for an Olympics so, for us, first and foremost is our target and goal. It’s driving this group. Every time we go out there we want to try and perform. We do know we have a special group of players and a great programme. The sky is the limit. We really just got to go for this and get over the line.”

Donnybrook on the “pop-up” pitch might just be Watkins’s time, where hope and history rhyme.

Hockey Ireland’s innovative strategy to play two women’s international hockey matches at Energia Park in Donnybrook has been welcomed by Leinster Rugby and is part of their longer term strategy to use the stadium for staging different sporting events.

Hockey Ireland on Wednesday confirmed that, using new pitch technology, the two Olympic back-to-back qualifiers against Canada on November 2nd and 3rd would be played on a “pop-up” hockey pitch similar to the one successfully used in Harlequins RFC’s home ground, the Twickenham Stoop, during the summer.

Although the rugby pitch surface was replaced a few months ago, Leinster Rugby has had its contractors make an inspection and is confident that no damage will occur when the hockey pitch is laid on top. Although both pitches are synthetic, the surfaces for the two sports are entirely different.

Hockey is not the first sport to use the Donnybrook facility. The Irish-American Football Association’s Shamrock Bowl XXXIII was staged in the stadium in August.

Although the Olympic qualifiers are a Hockey Ireland event, Leinster has also said it will be lending support in terms of the promotion of the event.

“Hockey Ireland and ourselves share offices on the same campus up in UCD and it is brilliant that we can now share a home stadium together for these two games, and we can’t wait to host them, and to fill out Energia Park, in November,” said Leinster’s head of commercial Kevin Quinn.

Jerome Pels, CEO of Hockey Ireland, said it will be a unique experience.

“This is a huge step for the sport in Ireland to play hockey in a venue of this size,” he said. “A lot of time and research has been dedicated to establishing whether the event could take place here. Similar to England Hockey’s successful use of an overlay carpet for their FIH Pro League matches at the Stoop in London earlier this year, we’re excited to bring this unique experience to Ireland.”

Hockey Ireland intends to draw fans from all over the country using the team’s profile as 2018 World Cup finalists in an effort to make the series a spectacle. The previous largest crowd for hockey in recent years was the estimated 2,200 who supported the men’s team in UCD for their London 2012 Olympic qualifier against Korea. The Irish women’s rugby team drew a crowd of 6,047 for their Six Nations game against France in March, a record for a standalone Ireland Women’s home match.