Chloe Watkins: ‘It’s hugely important that this Irish team gets to go to an Olympics’ 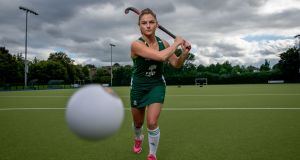 Chloe Watkins: “Twelve months might seem not that bad, but when you’ve been at it for 10-plus years, another 12 months can be quite a challenge.” Photograph: Morgan Treacy/Inpho

This week she was supposed to be travelling from the Irish holding camp in Fukuroi to the athletes’ village in Tokyo. History in the making. Ireland’s first game of their first Olympic Games against South Africa.

Chloe Watkins knows where she is supposed to be and her being somewhere else is kind of eating at her. It’s what desire and life ambitions does to athletes. They fill a space and when they are removed, more than went in is taken away.

“In March there was a period where a cancellation was on the cards,” she says. “You couldn’t rule out anything and that was a really nervous moment for everybody.”

Watkins, an ambassador for FBD, has been running on a strip of GAA pitch that runs along a road between two roundabouts in Glenageary, south county Dublin. She doesn’t know whose pitch it was except it is not the Cuala pitch. In another time that breach would be on this year’s GAA clár.

Now back on astroturf, it has been a slow move forward. Still, she is supposed to be in Japan at her first Olympic Games and right now, there is an almost physical sensation of being in the wrong place.

“Yeah, it was hard,” she says. “When the Olympics got postponed, it was hard to keep motivation high. I definitely felt a bit low and had to take a few weeks. You have dates, selection dates, travel dates that were just etched in my mind and I’d been working towards. When you come up past them it’s a weird feeling. As you say we should be kicking off, the opening ceremony and everything else.”

The team should have heading to Japan at the beginning of July for a three week run-in before this week leaving Fukuroi for Tokyo and the Olympic Village.

“Obviously everyone had planned their lives around Tokyo. For so many years that’s what we were working towards,” she says. “People needed space to reorganise themselves and look at the next 12 months. I think it’s going to be funny for the next few weeks until we get past the Tokyo period. Definitely been a bit prickly this week.”

For the Irish team, it will be three years between Tokyo 2021 and the World Cup final in London 2018. Her train of thought is that same group of players who won a silver medal may not be the same group in Japan. The pragmatic view is of understanding few teams remain unchanged over that time span, especially for such a prize.

Fit and healthy is her mantra. With ability and experience already proven that will be enough. There are younger players biting at the heels and this extra year could favour their drive. It’s an extra 12 months to prove worth, get stronger and with sharp elbows make a space.

While the squad will not have any international matches this year, there are more than six months in 2021 as well as a European Championships scheduled for before the end of July in Tokyo. A year extra may not seem like much. But then . . .

“We’ve had conversations,” says Watkins. “There are so many other things we have to factor into our plans, students, workers, where you’re living, girls that are outside Dublin, because we’re training back in Dublin, family and friends, those kinds of things.

“Twelve months might seem not that bad, but when you’ve been at it for 10-plus years, another 12 months can be quite a challenge. It’s a challenge definitely.

“Everyone has to assess their own situation, everyone is at different stages in their lives. It’ll be interesting to see the team that can go to Tokyo. Younger players might absolutely relish the challenge and be delighted with another 12 months to show themselves and what they can do. It’s about staying fit and healthy for myself and more seasoned players.”

It has been her longest stint away from a hockey pitch in the 20 years she has been playing the sport. To hit a ball with the Leinster-based players is almost like a reintroduction. There is no “combat” stuff just yet as they begin to feel their way. But players will be back to national sessions by the end of August and then into a full programme in September.

“It’s hugely important that this Irish team gets to go to an Olympics,” says the 28-year-old accountancy trainee. “It’s historic and hopefully we can write more history.

“We were happy enough with our draw. We showed at the World Cup we can get results in big tournaments. It’s competitive. It’s open and we definitely see opportunities to get points. It’s top four that go through. A few target games, and you could be in a quarter-final very quickly.”

Watkins again daring to kick another door down.