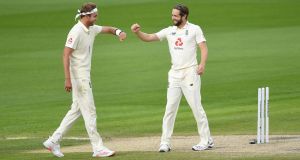 England finished on 37-2 at stumps with a 219-run lead against West Indies on day four of the second test in Manchester on Sunday as the tourists were bowled out for 287 after a dramatic late collapse when they lost six wickets to the new ball.

England, who failed to enforce the follow-on after West Indies reduced their lead to 182 runs, lost Jos Buttler and Zak Crawley cheaply as they tried to score quick runs, with Kemar Roach castling both batsmen.

First innings centurion Ben Stokes was tasked with opening the innings and he was unbeaten on 16 along with skipper Joe Root (eight not out), with a tense finish on the cards on Monday.

“It’s going to be a good day tomorrow. We need to set it up in the first 45 minutes, an hour tomorrow,” England bowler Stuart Broad told Sky Sports.

“In a dream world we get two new balls tomorrow. We’ve given ourselves a chance of winning this game, which is a great position. The second new ball is going to be quite important, even if it’s for four to six overs.”

Earlier, half centuries from Kraigg Brathwaite (75) and Shamarh Brooks guided West Indies to 227-4 at tea before Broad and Chris Woakes cleaned up the tail with three wickets each.

Brooks was the first to fall when Broad trapped him leg before wicket for 68 and the England pacer struck again in his next over to bowl Jermaine Blackwood for a duck.

Broad continued to make the new ball sing in his following over to trap Shane Dowrich lbw for another duck and the visiting wicketkeeper also cost his team a review as Hawk Eye confirmed umpire Michael Gough’s decision.

Woakes then got into the act to dismiss West Indies skipper Jason Holder, who edged the ball to Joe Root in the slips, reducing the visitors to 260-8 to give England hopes of enforcing the follow-on.

A half century from Roston Chase (51) ensured England would bat again before his resistance came to an end when Woakes rapped him on the pads before Shannon Gabriel was bowled out for the third duck in the innings.

West Indies have a 1-0 lead in the three-test series, which is being played behind closed doors due to the Covid-19 pandemic, after winning the first test in Southampton. The third test will also be played in Manchester.