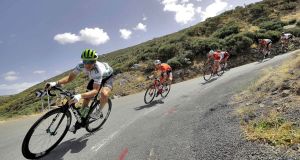 American rider Benjamin King won the mountainous ninth stage of the Vuelta, finishing atop the beyond-category La Covatilla on Sunday, while Simon Yates took over the race lead.

King stayed ahead of chaser Bauke Mollema on a long breakaway to win the 201km leg starting in Talavera de la Reina that crested three categorised passes before the final uphill push in 5½ hours.

King, who rides for Dimension Data, also won the fourth stage for his first Grand Tour stage win at age 29.

He had time enough to lift his arms in victory as he reached the finish line, only to shortly collapse on the ground gasping for air.

“I feel so bad right now,” Spanish TV cameras caught King telling his team as he recovered from the excruciating effort. “I can’t believe that.”

Yates of Michelton-Scott was the ninth rider to finish. The English cyclist took the red jersey from Rudy Molard, who had led the race for four flat stages but faded early on the brutal last ascent.

Yates leads Alejandro Valverde by one second, with Valverde’s Movistar teammate Nairo Quintana 14 seconds back. Both Valverde and Quintana are former Vuelta winners.

Yates led the Giro d’Italia for 13 days in May, with Chris Froome the eventual winner.

Dan Martin was best of the Irish in 50th place. The UAE Team Emirates rider finished eight minutes 27 seconds back, while Nicolas Roche was a further four minutes three seconds behind in 68th. The result saw Roche drift back 11 places to 35th, ending any chances of a top 10 finish overall. Martin improves seven places to 55th.

Monday is the first of two rest days in the three-week race.

Meanwhile, Mark Downey (Team Wiggins) and Irish-registered Rory Townsend (Canyon Eisberg) were in the day’s long-distance break at the Tour of Britain on Sunday. They were hauled back inside the final hour of racing, with Townsend holding on until 11km to go. Matthew Teggart (Team Wiggins) was best of the Irish in 55th place.

Tour de France champion Geraint Thomas’s hopes of winning the opening stage of the Tour in front of his home fans in Wales were dashed as German veteran André Greipel sprinted to victory on Sunday.

Thomas finished safely in the peloton after finding the pace too hot on the final climb. “I had to give it a go, being on home roads and so close to where I grew up. I knew the climb but once I went I was thinking: ‘What have I done?’” said Thomas, who is to have Newport’s velodrome named after him. “It was nice to have a dig but I don’t have the legs to finish it off.”

It was Greipel’s sixth stage win in the Tour of Britain.