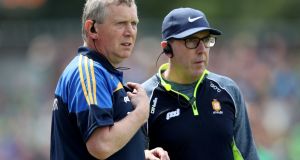 Clare joint manager Gerry O’Connor says his side have ignored Cork’s progress to the Munster final in an effort to avoid a repeat of last summer’s disastrous decider with the Rebels.

In 2017 Cork claimed just their second Munster title in 11 years with a comprehensive victory over Clare, and O’Connor says his side got caught up focusing on Cork’s strengths and failed to execute their own game plan that day.

So, in a bid to end their own 20-year wait for a provincial tile, Clare will not spend too long dissecting Cork’s form ahead of Sunday’s Semple Stadium clash.

“You asked me what did we learn from last year? We learned that the players have to take the onus and responsibility, they have to become leaders within the group and we focus on our own performance,” said O’Connor.

“I haven’t really looked [at Cork] that closely to be perfectly honest. I don’t think they have changed that much in personnel. I know we have changed a lot.

“There’s a lot of key differences. The main difference is that this year we’ve focused exclusively on ourselves rather than the opposition. We’ve added really good people to our backroom team but the biggest single change from our perspective is that the players have taken ownership and responsibility for the whole project.

“They lead the analysis; they lead the team talks. They look at the opposition and come back to us and they outline where they see their opportunities. Because the players are the guys out there, they are the experts and they understand the opposition far better than we do.

“It sounds very simple but that’s the reality of it. There’s no such thing as rousing team talks. It’s very business-like and it’s very specific in terms of how we go about performing.”

Following on from the disappointments of 2017, it was almost by accident that Clare discovered a bond among themselves when representing the county at the Fenway Classic in Boston last November.

Clare ended up winning that competition with victory over newly-crowned All-Ireland champions Galway, but O’Connor says the time spent together was critical.

“We were asked to go and play in a tournament over there and we went along. We said ‘look, let’s prepare for this as a starting point to the season’. Some teams were using it as a close out to the season but we used it as a way to start the season.

“We inadvertently stumbled across a training camp for ourselves just to kickstart the whole season.

“I was talking to John Conlon in the queue in Logan Airport and I said to him what were your thoughts and reflections on the whole Fenway classic. He said it was absolutely brilliant.

“There was a huge amount of time spent together and the fantastic example was in Smith and Wollensky’s [restaurant] around the corner from our hotel. He was sat beside Jason McCarthy for three hours. He said in the previous year he hadn’t spoken to Jason McCarthy.

“We are so focused as a group when you come into training, you come in you do your prep, your rehab, you go out on the field, you eat and you go home. He felt to spend that amount of time really strengthened the bond among the actual group.

“A lot of leaders developed over there in Boston and that was the start of our journey. And we see the Munster final on the next step of that journey.”

1 Tour de France: Every yellow jersey winner must feel guilty by some association
2 Clifford brothers to the fore as East Kerry retain title
3 Born to ride, born to win: Sam Bennett, the making of a green machine
4 Juan Imhoff and Racing 92 leave it late to end Saracens’ reign
5 Keith Duggan: Surreal story of John Delaney needs to act as a wake-up call for FAI
Real news has value SUBSCRIBE