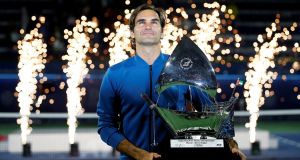 Roger Federer poses with his trophy after defeating Stefanos Tsitsipas of Greece in their final match in Dubai to claim his 100th title win. Photograph: Ali Haider/EPA

Roger Federer did more than win his 100th Tour-level tournament when he handed the Greek prodigy Stefanos Tsitsipas (his conqueror in the fourth round of the Australian Open two months ago) a 6-4, 6-4 tennis lesson in the 69-minute final of the Dubai tournament. He encouraged hope among his followers that, five months shy of his 38th birthday, he can still deliver the thrills they crave.

He always was more than a tennis player. For most of his 22 years as a professional, Federer has been a messiah, and rarely a naughty boy. He has been the shimmering image of near-perfection, on and off the court. He says all the right things and in the right order, in five languages if required. He can do no wrong, even when he does.

Nevertheless, the autumn of his career has been closing in since he won the last of his 20 majors, in Melbourne nearly 18 months ago. The believers will never hear of it, of course. They have the sort of faith in Federer that boxing fans had in Muhammad Ali. He surely would never let them down.

Federer has had his own doubts. His body does not lie to him and when he recently decided to return to the clay of Roland Garros this year for the first time in four seasons he signalled he was preparing for a concluding push towards the finish line, wherever it might be located.

Federer is driven to continue by his love of the game and by hunger for the one trophy of significance to elude him: an Olympic gold medal in singles. For all that he sometimes dismisses the accumulation of trophies as a byproduct of his efforts, he let his guard slip on court in Dubai at the weekend when asked to dwell on the magnitude of winning a century of titles: “I like these type of numbers.”

Ambition and ego should be enough to extend his stay in the bearpit until August 2020 in Tokyo. The singles final is on the 2nd of that month, six days before his 39th birthday. He will love those type of numbers. There have been only 15 Olympic champions, in the formative years of the modern Olympics, and since the sport returned in 1988. Andy Murray, who beat Federer in the London final, is the only player to win gold twice. Federer would settle for winning it once and saying goodbye.

So these are nervous times for disciples of the Church of Federer. They are suffering the same angst as a dog owner contemplating the inevitable passing of a faithful friend who cannot go on forever.

There is plenty of life in the old Swiss dog, yet, of course – as he reminded everyone in the 100th victory speech of a career that began as a precocious teenager in his native Basel and which delivered him his first title in Milan in 2001, when a year younger than Tsitsipas is now.

Of the 32 players who began that tournament, Federer is the only one still standing. The player he beat in the final, the Frenchman Julien Boutter, told the Daily Telegraph: “It was the beginning of Roger. Before he was many times pissed off on the court. But during this match he stayed focused.”

It was Federer’s third final among scores to follow (30 in slams, and 10 of those consecutive), Boutter’s first of two. Between 2005 and 2010, Federer reached 18 of 19 grand slam finals, winning 12. Focus would never be a problem, although it got tougher in recent years.

There will be some who wonder why a mega-rich father of four would want to subject his legacy to continued scrutiny when he could walk away. As much as Federer maintains he is not in it for the glory, he loves the love of the crowd as much as any rock star. As for his talent, there has been nothing like it, whatever the arguments about who is the best player of all time.

To even mention the subject of historical dominance is to set rolling familiar and fruitless arguments about the relative merits of his nearest contemporary rivals, Rafael Nadal and Novak Djokovic. The Spaniard has 17 majors, the Serb 15. They are within touching distance of overhauling Federer’s score of slam titles – if he does not win another. Federer is nine career titles behind Jimmy Connors but he would sacrifice that to win another couple of slams and keep Nadal and Djokovic at bay a little while longer. While each of them has contributed to the stature of the other, they remain the fiercest of competitors.

In Dubai on Saturday, where he had won seven times already, Federer made a lot of people very happy when he said: “It’s been tough but the sacrifice has been very worthwhile. We’ll see how much more I’ve got left in the tank.”

Meanwhile, mortals strive elsewhere. Federer was joined as a century-scorer on Monday by Dan Evans, who cracked the three digits again in the rankings after a rousing run of form. Kyle Edmund won again, too, building the belief he may break through for a slam title this year. And, on Wednesday, Murray will reveal how his recovery from a second hip operation is progressing. Above them all floats Federer, still stinging like a bee at 37.