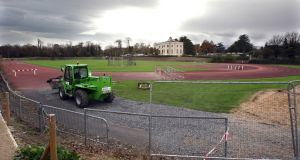 A view of the athletics track at Belfield before it was taken up. Photo: Cathal Noonan/Inpho

There’s often a sense of better late than never when it comes to Irish sporting facilities, and 40 years after originally being laid, and over six years after being ripped up, University College Dublin (UCD) is finally getting a new running track.

An anonymous donor has stepped in to help fund the new facility, which now comes with an estimated cost of €3 million: it’s unclear exactly what percentage of that €3 million is being donated, although what is certain is that the identity of the donor isn’t being revealed. Not yet anyway.

It won’t be on the original site at the Belfield end of the campus, but situated in what in recent years has been designated the Sports and Recreation Character Area of the 158-hectare campus, close to the Clonskeagh entrance, alongside the existing sports centre, Olympic size swimming pool, the national hockey stadium and the UCD Bowl.

It will also be an eight-lane, tartan surface, IAAF-approved track, which like the originally facility itself, will act for training and competition purposes, for both track and field events. Work on the new track is due to get underway as soon as possible, and while it may not be entirely complete for next year, will be ready for 2020 at the latest.

Welcoming the donation, the President of UCD, Professor Andrew Deeks expressed his delight that the long wait for a new running track was now coming to an end.

“With the support of this major philanthropic donation, the University is proud to announce that it is now able to move forward with the design, planning and development of a new athletics track on the Belfield campus,” said Deeks.

“The lack of an athletics track on the campus has put additional pressure on our athletes, some of whom have had to commute daily between campus and off-campus facilities for their training sessions.”

“We are grateful to these athletes and to the wider university community for their patience. The University always aspired to have a world-class athletics track as part of the university’s overall sporting facilities, but lacked the funding to deliver on this aspiration. We are extremely grateful to the anonymous philanthropist who stepped into the breach, and whose generous donation will now fully enable the track project and the maintenance of the track for the next twenty years, after which the university is committed to maintaining the track.”

“Our entire university community owes an enormous debt of gratitude to this donor, and to all donors to the University, for the remarkable generosity that is enabling us to transform the teaching, research and sporting facilities on campus for this generation and for generations to come.”

When first opened in June 1977 by then taoiseach Liam Cosgrave, costing 175,000 old Irish punts, Belfield was the first tartan running track in the Republic (the Mary Peters track in Belfast had opened on Easter Monday, 1976); complete with electronic timing and a photo-finish, a modern sporting venue par excellence.

UCD was chosen given both its convenience of location and suitability for the track itself, including its peaceful surrounds and potential for maximum use considering the fast-increasing student body on the Belfield campus, these days around 32,000 and still counting.

Yet the story of its sad demise in recent years has already been told. News of the track’s closure, on November 22nd 2011, was coarsely abrupt: UCD AC was given just 21 hours notice, that “due to health and safety concerns” and given “the surface is badly worn and becomes slippery when wet” the track “should be closed to all users”.

At the time a statement from the UCD student president’s office said: “Works to redress this situation have already commenced and we hope to be able to provide an alternative facility on campus in the future, subject to funding becoming available.”

By then a site had already been set aside on the “sporting end” of UCD, on that west side of the campus (where Leinster Rugby also have their training pitches): the cost of developing the track was then quoted to be around €1.6 million.

In the years since, the track fell further into disrepair: JCBs carved out trenches at very deliberate intervals so render the track useless for any training purposes. For three years it acted as a storage space for steel crates of bricks and other building materials for various construction projects around the campus.

Then in June 2014, the JCBs moved back in and turned the entire lower half of the track into a car park; the top half, including the finishing line and once sacred track entrance, still lies in ruinous disrepair.

However, those memories can now be left behind as the new track is ready to rise again, with exiting times ahead: indeed Belfield always had reputation for fast times over the years, most famously at the GOAL charity meeting on August 17th 1985, when four of Ireland’s top milers, including Coghlan, ran a 4x1-mile relay world record of 15:48.08, which still stands.