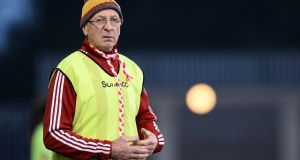 It might not be quite right to say that Francie Coleman is one of a kind, as Irish sport is liberally sprinkled with unheralded volunteers who devote a good part of their lives to their local clubs.

Still, there can’t be too many who have trained the same team for all but one of the last 25 years, so Coleman’s place in the history of Monaghan’s Donaghmoyne is a remarkable one.

He took one year out a while back to recharge his batteries, but is now closing in on a quarter of a century’s work with the club, supported these days by coach Annmarie Burns and assistant manager Noel Marron.

If you didn’t know how his team had fared in recent years, you would have worried they were in for a hiding in last weekend’s All-Ireland senior club final based on his wary enough preview of the game when he spoke to Jerome Quinn after the semi-final.

You could only smile. No flies on Francie. Fulfil the fixture they did, beating Dublin’s Foxrock-Cabinteely by seven points and becoming the first Ulster club to win back-to-back All-Ireland club titles.

When asked what kept him involved after all these years, he said it was the dream of the club finally retaining the title, as it had gone off the boil in previous campaigns when they were the defending champions.

Quinn pointed to Linda Martin’s penalty save in the semi-final as being the critical moment.

“Well, that’s what she’s there for,” said Coleman, sounding Keano-esque.

When the club was formed in 1991, Coleman asked if he would train the women’s section. Teams from under-21 to senior were set up. Coleman’s work at underage level finally bore fruit from 2000 and it has since been almost on an unstoppable force in Ulster, winning 10 of the last 12 titles, with their All-Ireland tally now up to five.

Every member of the Donaghmoyne team learned their football under Coleman. Their affection for and gratitude to him are evident when they speak of the role he has played in their lives. They are also grateful for all the advice, some of which has been unique.

When asked what was the best advice she had ever been given, Sharon Courtney said: “Francie always says, ‘Stick to them like shite to a blanket!’. So I suppose as a defender if you do that, you won’t go too far wrong.”

It brings a whole new meaning to blanket Ulster defending.

In a week when Ireland’s higher-profile coaches and managers, all with exceptional achievements in 2016, were lauded, it is worth remembering the unheralded ones working away in their parishes. In Coleman’s case, this has been for more than a couple of decades. These people have been giving their young charges a foundation in life that money could never buy.

“Winning a few matches makes it all worthwhile,” he said. Days like last Sunday probably left him feeling he could manage for another 25 years.