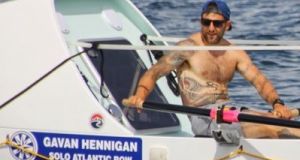 Gavan Hennigan: the Galway man on Thursday evening was seventh overall and leading the three solo rowers in the Talisker Whisky Atlantic race to Antigua.

A total of 32 senior and under-23 athletes will attend the Ireland Assessment this weekend at the National Rowing Centre in Cork where they will race over six kilometres.

Paul O’Donovan and Claire Lambe are exam-tied and Sinéad Lynch is coming up to the time when she has to make a decision on her future and may not compete.

Monika Dukarska is also holding off entering the Ireland system. But most of the other Ireland hopefuls will hope to impress on the water.

The new women’s pair of Aoife Feeley and Aifric Keogh can make a mark – they take on the under-23 crew of Amy Mason and Tara Hanlon.

Feeley and Keogh have been pencilled in to attend the warm-weather camp in Spain just after Christmas.

Others in line to travel include Eimear Lambe and Emily Hegarty, two of the top under-23 prospects, and the men’s group from Queen’s University which includes Sam McKeown, Philip Doyle and Tiernan Oliver.

Spain was also the jump-off point for Atlantic oarsman Gavan Hennigan this week.

The Galway man rowed out of La Gomera in the Canary Islands on Wednesday, and on Thursday evening he was seventh overall and leading the three solo rowers in the Talisker Whisky Atlantic race to Antigua.

Hennigan, a deep sea saturation diver who has worked on construction on oil rigs, has an interesting history.

Involved in drug and alcohol abuse in his youth, he reformed and took up adventure sports and ultra racing (endurance tests, often in extreme environments). He is doing this race to raise money for Cancer Care West and Jigsaw Galway, which supports the mental health and wellbeing of young people in Galway.

The Irish involvement in Atlantic rowing could reach a new level next year.

Patrick Gallagher, a 31-year-old amputee from Achill Island, plans to row the North Atlantic from Newfoundland to Achill in the summer.

The former British Army man, who lost his leg in an explosion in Afghanistan, was part of the Row2Recovery four – all amputees – which completed the 2015/2016 race.

He told The Irish Times that he hopes to become the first amputee to complete solo ocean row unsupported.

He has his boat ready – “it is a clean slate” – and is ready to talk to sponsors.

“I hope to inspire people,” he said.

An inspiring sight awaits those who pick up Band of Gold, Kieran Kerr’s new history of St Michael’s.

On page 78 a picture from 1950 shows 10 maiden eights competing at Limerick Regatta.

The book, a substantial hardback, traces, year by year, the fortunes of the rowers and administrators from 1901 to the present day.

What is novel is how it locates the genesis of St Michael’s in the gigantic Temperance movement of the mid 19th Century. St Michael’s were founding member of the GAA – and Limerick senior hurling champions in 1895.

A novel event on the water was last weekend’s Dirty Dozen challenge. Monika Dukarska and Lukas Babac came out on top.