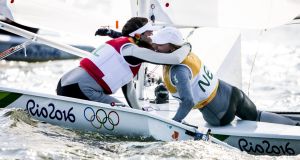 December has turned out to be a busy month for Ireland’s top Laser Radial sailors.

This morning two youths go in search of a fourth world sailing medal in as many years in New Zealand.

At home Olympic silver medalist Annalise Murphy is a frontrunner in today’s Irish Times Sportswoman of the Year Award. If successful, it would be the latest in a series of accolades for the 26-year-old.

Since her celebrated homecoming in Dun Laoghaire four months ago, the sailor’s public recognition levels have soared, but sailing’s first medallist in 32 years still manages to keep herself on an even keel.

Her popularity means she is also in the running for Saturday’s RTÉ Sports Personality of the Year, decided by public vote.

Sailing is, of course, anticipating big news from today’s ceremony where previously no other Irish sailor has even taken an Irish Times Sportswoman of the Month prize, let alone been shortlisted for the top award.

Such an acknowledgement would rightfully highlight Murphy’s stunning comeback from London 2012 heartbreak to an Olympic Sailing silver medal.

It would also represent important end-of-year peer review for the solo helmswoman who embarks on a voyage towards Tokyo 2020 in January.

And in a broader context, a win today, say Irish Sailing officials, would also help the sport’s campaign to get new people – especially women – afloat.

Last October, Murphy was the only female invited to contest the All-Ireland sailing championships in Cork Harbour, finishing second in a fleet of 16.

Nine months after its nationwide launch – with Murphy as its hero – the ISA’s ‘Try Sailing’ programme is one of the association’s success stories of 2016, with 3,600 novices testing the waters at 66 clubs and sailing centres across the country.

But cost, as a barrier to entry, remains stubbornly high.

Murphy returns for today’s ceremony direct from Bermuda where she and Rory Fitzpatrick, her Rio coach, both competed at an International foiling Moth Regatta.

Murphy sat out the last three races of the ten-race series to finish 26th in a fleet of 50 ‘Mothists’ drawn from 10 nations but Fitzpatrick enjoyed a great end to his season.

The National Yacht Club helmsman placed tenth overall to add to his fifth overall at July’s European championships in France.

In Auckland, at the World Youth Sailing Championships, Murphy’s younger NYC clubmates, Nicole Hemeryck and Johnny Durcan, (a member of both the NYC and Royal Cork) compete in the Laser Radial class which sees the most countries and the most diverse experience levels of all the fleets taking part.

Schumacher name gives me motivation every day, says Mick 16:46
Andy Farrell doesn’t know yet if he’ll be with Lions or Ireland this summer 15:46
Gordon Elliott hearing to start at 9.30am on Friday 13:45
Weary England’s batting woes continue as India take control 13:33
First 2023 Rugby World Cup tickets to go on sale on March 15th 12:58