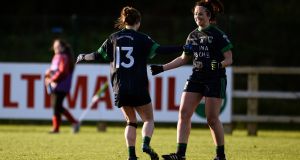 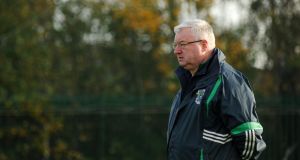 Selector and Amy’s father Pat Ring will be on the sideline at Parnell Park for final between Foxrock-Cabinteely and Donaghmoyne. Photograph: Sam Barnes/Sportsfile 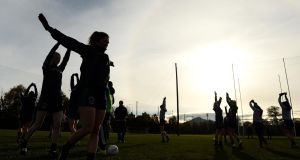 Amy Ring and her team-mates in Foxrock-Cabinteely will hope to lift the Dolores Tyrrell Memorial Cup on Sunday. Photograph: Sam Barnes/Sportsfile 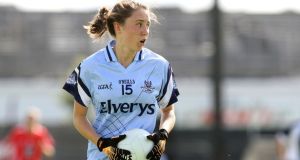 It has been a 19-year journey for Foxrock-Cabinteely’s Amy Ring to reach Sunday’s All-Ireland senior club final. Aged seven, en route to her cousin Ciara’s house in Cabinteely, Ring spotted a group playing ball on the local pitch.

From the back seat she pleaded with her father Pat to stop the car before taking off across the road to join in. That journey will near its end at 2.45pm on Sunday in Parnell Park against Donaghmoyne of Monaghan, when Ring will be hoping she will get to lift the Dolores Tyrrell Memorial Cup for the first time in the club’s history.

However, it has been a bit of bumpy ride getting there. There was a time when Ring and Cabinteely lined out in a championship final with just 13 players against the likes of Ballyboden-St Enda’s. It wasn’t sustainable, so in 2005 they amalgamated with Foxrock, and together two struggling clubs have managed to reach the greatest platform in women’s club football.

The transition wasn’t without a few issues. They still don’t have a pitch to call their own, though the parish allows them to train at Cornelscourt and Kilbogget. However, with a united push by Ring’s father Pat and Philip McAnenly, they made it work.

On Sunday Pat Ring will stand on the sideline as a selector alongside Peter Clarke and former Dublin star Angie McNally. He has never treated his daughter differently to any other player despite her talent in having played at every level for Dublin.

“He brought us up well, that’s for sure,” Ring says about herself her older brother Ian.

“He didn’t hand anything to us on a plate. When we both turned 16, it was, ‘Out you go and get a part-time job’. He would have been fair, but we wouldn’t have been spoiled too much.”

This season another injury led to a tough decision to step away from the Dublin senior set-up despite a good league performance. A grade three tear in her hamstring and groin in March meant Ring had to reassess her status with Dublin . . . and her priorities.

“I had to have a tough conversation with the management team around the end of July. It was hard but I had to think long term. I felt if I could get anything out of the season with club, then I didn’t want to jeopardise that by coming back too soon. Looking back, it was the right thing.”

She returned four months later at the start of August, and since then she has won a senior county and Leinster title. In the past, she has lost both, so to secure Foxrock-Cabinteely’s second ever provincial title last month was special, says Ring, who works as a merchandise planner for Primark at its global headquarters in Dublin.

“We knew we had it in us. After losing the semi-final last year, we needed to go one better. I think that helped our mentality when our backs were against the wall,” Ring says.

“Some of our key players got scores that gave us a kick and we knew then we weren’t going to lie down. We wanted to right that wrong.

“We were devastated to lose last year and it did take a while for the wounds to heal. We were more disappointed in ourselves, but we could have no arguments. Donaghmoyne deserved it.

“We took Christmas off and hopped back on the horse, but that defeat taught us what we had to do to get to the next level. After a loss you can tend to look into things too much. You can get into the nitty-gritty, but sometimes it’s best to just get on with it.”

There has been no annual team-bonding session this time around. The year got away, but then again, the taste of defeat can build the greatest bond of all.

On Sunday morning, Ring and her team-mates will meet for breakfast before making the 30-minute journey across to Parnell Park. It will mark the final leg of her 19-year journey, a journey, she hopes, will end as happily as it started.

Echoes of Berlin 1936 . . . Should Beijing Winter Olympics be boycotted? 10:01
The Offload: Ireland women must be allowed to move with the times 10:00
Tiger Woods touched by red and black tribute by fellow players 08:52
England prop receives death threats for not clapping Wales off the pitch 08:29
How Enter The Dragon became a martial arts phenomenon 08:00