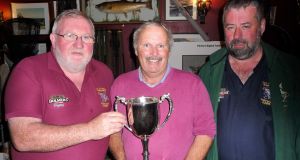 The Gaeltacht village of An Fhaírche (Clonbur) in Co Galway came alive last week with the hosting of the National Vintners Fly Fishing Championships.

Now in its 16th year, over 130 competitors from the four corners of Ireland gathered for two days fishing on Lough Mask coupled with plenty of ceol, caint agus craic.

It was back in 2001 when the concept of a vintners competition was conceived with Dan Dennehy from Kanturk, Co Cork and fellow publicans prepared to give it a go with one proviso – it must be held midweek to facilitate the trade.

Since then it has blossomed to become one of the most sought-after events on the angling calendar and, while still commanding a good representation from the bar trade, invitees now make up the majority in attendance.

Dan is still the man at the helm alongside Tom ‘Swanky’ Sweeney and together, they run this extravaganza which grows in stature as each year passes. Of course, Burkes Bar and award-winning Restaurant in the village remains pivotal to the entire programme of events.

Fishing conditions could best be described as ideal with plenty of cloud cover and a stiff breeze yet only 50 per cent of the 131 anglers caught fish. As one local put it: “It’s the worst year for fishing Mask I can remember. Lack of fly-life could have a lot to do with it,” he said.

Peter Byrne from Castlebar struck gold on both days fishing the deeps off the Black Rocks and Devenish Island to take the vintners title for 2017 with a total of seven fish for 4.432kg. His catch also greatly helped to secure the four-man team prize with 11 fish for 6.286kg.

Mask always appears to produce a really good fish at these events and this year was no exception.

“I was about to retrieve my cast when this huge fish grabbed the Stimulator fly on the top dropper,” is how Pat Gallagher from Duleek, Co Louth described his fish-of-a-lifetime ferox trout which weighed in at 3.434kg (7lb 9oz).

Michael Fogarty (83) from Kanturk, Co Cork was carried shoulder-high to the weigh-in with his two trout.

“It’s the first time I have caught fish here in 10 years,” he said.

For his prize, Michael opted for a bottle of 12-year-old whiskey.

“I’ll enjoy drinking this,” he said.

Over dinner, Cyril Boggins from Killarney held a raffle towards stream enhancement which realised €660 to be divided between the local Tourmakeady and Ballinrobe angling clubs.

Competition chairman Dan Dennehy thanked the boatmen, the many sponsors, and the committee for their hard work and the Burke family for their hospitality.

The championships saw 55 pairs compete in the cross-border event staged across Leitrim, Fermanagh and Cavan and where anglers from Belgium, Germany, the Netherlands, Lithuania, USA, UK and Ireland enjoyed a week full of hybrids, perch, roach and bream.

Having moved into the lead on day two, the winning duo held an impressive lead all week, showing some world class fishing skills. They said they were “over the moon” to have won the title having come so close last year.

Consistent fishing from Dean Barlow, and then a top match weight of 29.500kg of bream and skimmers on the feeder from Steve Fleming, saw the Drennan-backed duo move into the top 10 on day four.

They held on to finish as runners-up for the €5,000 prize. German regulars Thorsten Beil (Browning) and Rudiger Hansen (Browning) finished in third place and collected €2,500 in a sensational finish.

The event attracted the world’s elite pole and feeder anglers fishing in pairs, but was also a match for those of all abilities thanks to inclusion of £10,000 sponsorship in tackle and vouchers from Daiwa Sports UK.

In the individual category, this year’s holder was Michael Buchwalder, with a solo weight of 73.060kg over the five days. Michael took home the prestigious Daiwa Cup along with £1,000 prize money and tackle voucher worth £1,500.

The organisers wish to thank the fisheries for their services, Ballinamore Tourism Group, Leitrim Council and Fermanagh & Omagh District Council and the landowners who gave access to the waters. Next year’s event is scheduled for Monday 3th to Friday 7th September, 2018.

Full results are available at www.worldpairsangling.com.

Special trip to the Grimsa in Iceland

Farlows Travel has secured six rods to enjoy the opening of the season on one of Iceland’s most iconic rivers and lodges, the Grimsa. Opening day of 2017 saw six rods land an exceptional 40 fish in one day, a mixture of grilse and fish well into the teens.

Arriving on 18th June 2018 and fishing from the 19th, the price of £5,850 (€6,639) includes airport transfers, five nights’ full board and accommodation and four and a half days’ guided fishing, with a guide for every two fishers.