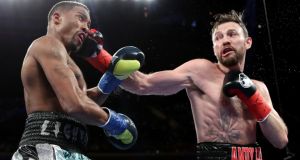 Andy Lee earned a unanimous points decision over KeAndrae Leatherwood on his return to the ring. Tom Hogan/Inpho

Andy Lee admitted that he was slightly sluggish on his return to action in New York on Saturday night, but the Limerick middleweight welcomed the opportunity to shake off his ring rust.

Castleconnell man Lee was fighting for the first time since the loss of his WBO world title to England’s Billy Joe Saunders in Manchester back in December 2015.

Competing on the undercard of Gennady Golovkin’s world middleweight title defence against Daniel Jacobs, Lee took around four rounds to find his rhythm against the cautious Leatherwood, a 28-year-old who carried a 19-3-1 record into the bout.

The 32-year-old Irishman, boxing for the 39th time as a pro improved his own record to 35-3-1 after winning the cagey bout.

“It’s always good to come back to New York and it’s always a pleasure to fight here,” said Lee following his fourth victory at the Garden. “It took me a while to get going but he was a tough and awkward opponent.

“He stayed in his shell and he wouldn’t really open up and I could see he was very wary of my right hook,” continued the Limerick southpaw on Leatherwood.

“He was protecting that side all the time, but it took me a while to get into it. Around rounds four, five and six [I WAS]good… and then towards the end I knew he kind of just wanted to coast and try to go the distance,” added the 32-year-old, who admitted the win was not particularly impressive but helped him shake off his ring rust.

“Yeah, I think there was a bit of ring rust, but I was just getting back into it,” said Lee, who took over year out following a points loss to Saunders - now a stablemate under trainer Adam Booth.

“It’s been a long time… I’ve been completely out of boxing for a year, I was at home [IN IRELAND]and I wasn’t in the gym, but it’s good to be back and I think the rounds will stand to me more than if I had finished him in a round.

“It was hard to fight and engage with somebody who’s not trying to fight you back and he [LEATHERWOOD]had fast hands so I could’ve tried to force to press the issue, but then I would have end up getting caught with silly punches, which happened at times, because he had quick enough hands,” added Lee, who claims he plans on fighting for at least another year in the hope he can book a title shot with Golovkin’s name mentioned by the Limerick man ahead of the Kazakh’s main-event meeting with Jacobs.

A father to be, Lee’s wife is expecting the couple’s first child this summer, while the 32-year-old fighter hopes to return to the ring by the end of the year with a home bout being one possibility.

“I’ll just relax,” said the Limerick man on his immediate plans. “I’m going home and the first baby is on the way… in June.

“I’ll just look forward to that, enjoy it and I’ll be back in the gym in September and I hope to fight maybe in Ireland,” added Lee, whose opponent, Leatherwood, proved to be a fairly tricky customer although the Alabama fighter did not offer much in terms of aggression throughout the eight-round bout.

Leatherwood did manage to land some decent right hands late on in the second round, but Lee took control from the midway point of the fight with a combination of punches being the highlight of the Irishman’s performance in the sixth round.

The unheralded Leatherwood, who was by no means a soft opponent but would not be classified as world class, insisted he had no problems with the result following the fight.

“I felt good and Andy was just a little busier than me,” said Leatherwood. “I think that won him the fight.

“It was challenging. He [LEE]was kind of crafty, a southpaw who threw me off a little bit.

“I think I showed I belong at this level… maybe we’ll cross paths again,” added the Alabama middleweight.

Golovkin, who has also been linked to a bout against Saunders, claimed a unanimous-decision win over Jacobs in the headliner at the Garden.