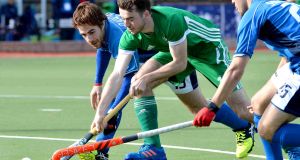 A rampaging second quarter saw Ireland blow away Poland 5-1 at Stormont and advance within one win of their target, a ticket to World League Round 3.

Goals in quick succession from Jonny McKee and Eugene Magee eased a tension in what was a high-pressure quarter-final around the 20-minute mark.

Shane O’Donoghue slammed home a 26th-minute corner goal for a 3-0 half-time lead and the Green Machine had killed off a potentially hazardous quarter-final tie.

O’Donoghue added another for good measure before Poland – with their World Cup hopes on the line – rallied in the closing 10 minutes.

Patryk Bulka did get them on the board while Pawel Bratkowski hit the bar but Ireland finished with a flourish, McKee credited with the final touch from a gorgeous flowing move from halfway.

It was a performance with much more vigour than the group games against Wales and Austria as Neal Glassey and O’Donoghue showed far more bite in the tackle.

Their tenacity led directly to two of the goals from turnovers. Another facet of the performance was the tactic of pushing on the sweeper. This played a part when Matthew Bell stepped on to shoot for the opening goal, McKee touching it beyond Rafal Banaszak.

Magee then touched in when the other defender joining the attack, Conor Harte, picked out him out at the back post.

Ireland advance to play an impressive Wales in the semi-final. The winner not just advances to Sunday’s final but also earns a ticket to the next phase of the World League competition where the World Cup tickets will be handed out.

France and Scotland will contest the other semi-final.