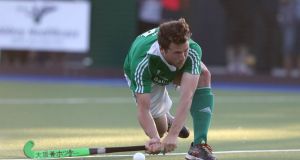 David Keogh and Leo Micklem were the toast of Glenanne as the duo combined to hand the Tallaght club their first Mills Cup title in nine years, beating a much-decorated Monkstown side in a pumped up tie.

Keogh scored two audacious shoot-outs – one in the regulation first five, the other in sudden death – while goalkeeper Micklem made five quality saves to land the Leinster senior title.

They had spent a long time in arrears, trailing to two David Cole drag-flicks in the first half, counter-attacking Eddie O’Malley’s classy opening goal for 2-1 at half-time.

But the Glens are famed for their battling spirit and pushed on higher and higher with Keogh and Richard Couse forcing the issue. And, after a series of penalty corners, Stephen Brownlow nailed their equaliser with a rasping straight flick for 2-2 with six minutes to go.

Clive Kennedy and Neil Byrne went close to winning it in normal time and their wait for glory was prolonged further when the shoot-out yielded only one goal from either side from the first five rounds.

Keogh, though, crowned his day with a second perfect finish before Micklem denied Kyle Good to spark the celebrations in earnest.