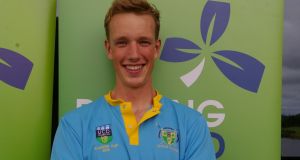 UCD’s David O’Malley: the stroke man, with Shane Mulvaney, formed the Ireland lightweight pair which finished fourth at the World Under-23 Championships.

In an action-packed weekend - there are events in Munster, Ulster and Leinster – the Colours Races on the Liffey stand out. UCD’s senior men’s eight take on Trinity this Saturday with the aim of taking their ninth Gannon Cup in 10 years.

Trinity, however, have good recent form. They won the Erne Head of the River impressively, while UCD had a crash and finished well down. UCD also lost the Gannon Cup toss. Trinity chose the favoured North Station which should give them an advantage in the early stages of a race set to be run in a headwind with strong gusts.

If their placing at the Erne head gives Trinity’s men hope, their women’s senior eight spun the other way. They underperformed. UCD look the clear favourites in the Corcoran Cup, though they also lost the toss and will be on the south station.

Lambe’s elder sister, Claire, will compete for Cambridge in the Boat Race in two weeks’ time. The Lambes look a good bet to complete a remarkable cross-channel double.

One bit of bad news is that the Garda will not provide outriders on Saturday. Following the race on a noisy open-topped bus all the way from O’Connell Bridge to St James’s Gate has been thrilling for spectators, but it will not be possible this year.

Not all the up-and-coming Ireland stars will be based in the capital on Saturday. Daire Lynch of Clonmel (18) is entered as a senior single sculler at the refixed St Michael’s head at O’Brien’s Bridge – there are 23 junior 18 single scullers in the generally youthful line-up.

Chris Beck of Queen’s and Niall Beggan of Commercial are amongst the five entries in the men’s senior single at the Lagan Head in Belfast.

Contrary to the impression which may have been given in last week’s piece, the Irish Amateur Rowing Union, which became Rowing Ireland, had female honorary secretaries: Lorna Siggins (of The Irish Times), Christine Caffrey, Mary McGrath and Ann Seery. Thank you to the readers who got in touch about this.

The one province not staging a rowing happening this weekend is Connacht, but there is good news on the development of the Fisa-standard course at Lough Rynn. Leitrim county council are seeking tenders for a start bridge, finishing tower and finishing tower pontoon. The work, which is phase three of the development, should be completed by September.