'Is there being enough done? No' - Concussion dangers not being taken seriously 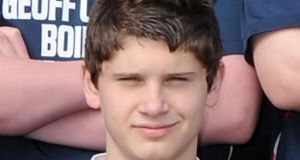 Ben Robinson died as a result of second impact syndrome suffered in a match for Carrickfergus Grammar School in Januray 2011.

This will be the third occasion Karen Walton and Peter Robinson enter a courtroom on behalf of their son Benjamin.

By issuing civil proceedings against World Rugby, the IRFU, the Ulster Branch, referee David Brown, coach Neal Kennedy and Carrickfergus Grammar School, Mrs Walton and the Robinson family are once again shining a spotlight on alleged “negligence regarding concussive-type injuries and the safety and management of the game and their failures in their duty of care owed to Benjamin”.

In September 2013 the Belfast coroner determined at an inquest, which initially convened in September 2012, that 14-year-old Benjamin died as a result of second-impact syndrome while playing rugby.

This syndrome is when a blow causes swelling to the brain before it has recovered fully from an earlier injury.

“The family’s legal team [G R Ingram & Co solicitors] have gathered further evidence to confirm that Benjamin’s death was due to second impact syndrome and was preventable,” read a statement by Benjamin’s parents.

At the time of the inquest’s findings, the IRFU noted: “Injuries of this nature are highly unusual in rugby. The IRFU and Ulster Rugby observe all international best practices, as set out by the International Rugby Board.

“We have in place, and continue to develop, education and training campaigns to ensure player welfare is prioritised at all times.”

Advancements in the treatment of concussion are expected to be formalised following the fifth International Consensus Conference on Concussion in Sport, which concluded its two-day gathering in Berlin yesterday.

Speaking to The Irish Times about her role as a concussion awareness campaigner, Karen Walton said: “Is there being enough done? No.

“It is not only in rugby. I have a daughter who plays football so I also see what happens there.

“Benjamin wasn’t the only time I came onto the pitch, and have said: ‘Why are you running your finger across that girl’s eyes? If you think she is concussed, you should take her off and not put her back on again.’

“We have a new education minister [Peter Weir] in Northern Ireland and it has come back to me that Benjamin’s [concussion information] leaflet that should be going out every September to schools, something that should just be automatic, there are box loads of that leaflet sitting dormant somewhere.”

In 2014, Lucas Neville received €2.75 million plus costs from the High Court in Dublin after suing St Michael’s College and St Vincent’s Hospital.

The IRFU concussion campaign, “stop, inform, rest, return” is available on their website.

While it is far from the nightmare the Robinson family have had to face, the civil proceedings issued against the coach of the Carrickfergus team and the referee will chill the rugby community.

Coaches and referees around the country may need to seriously revise the extent of their responsibilities in rugby matches and their centrality to the duty of care of school children.

At the national concussion symposium in Croke Park this month, Dr Rod McLoughlin, the IRFU’s head of medical services, categorically stated no head injury assessment (HIA) can take place during an amateur or underage game.

“Nowhere in the domestic game in Ireland is there a 10-minute rule (HIA),” said Dr McLoughlin. “Absolutely nowhere.”

Another concern arising from the concussion symposium is the seven-day return-to-play protocols in professional rugby. That number rises to 21 days for a concussed amateur and 23 days for underage players.

“I hope they change that,” said consultant paediatrician Niamh Lynch, who treats juvenile concussions at Bon Secours Hospital in Cork.

“The whole timing of it is an artificial construct. Our brains do not work in weekly cycles.

“Sporting bodies like the GAA and IRFU are clear that these are just guidelines but there is always a danger that the guideline will become a deadline. Or targets for a player to return. That’s where problems arise.

“How do you know that the brain has a seven-day repair window? It is scientifically impossible. If I break my leg I can’t say: in 21 days time my leg will be better. Everyone is different. When my leg is better – be it 10 or 50 days – I will be able to walk on it. I will know it is better. It is the same for the brain.

“Trotting a child into their GP exactly 23 days after an injury and saying ‘Well, it’s been 23 days since the injury, ding dong, time is up. Let him back to play.’

“The emphasis should be on symptoms, not time.”