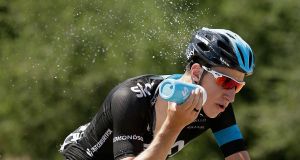 The International Cycling Union (UCI) has stepped into the latest controversy involving Team Sky to ask UK Anti-Doping to assess claims the team covered up a rider’s use of banned injections.

Josh Edmondson admitted breaking the sport’s “no needle” rule while a member of Team Sky between 2013 and 2014 by injecting the amino acid L-carnitine as well as vitamin B12, folic acid, damiana compositum and the supplement TAD two or three times a week for about a month in 2014.

The vitamins are legal but riders have been banned from using needles by the UCI since 2011.

The 24-year-old was caught by a team-mate at the 2014 Tour of Poland but Team Sky’s senior management did not report the matter to the authorities.

The team, and its former head of medicine Dr Steve Peters, have denied a cover-up and said they were concerned by Edmondson’s mental state and that the rider had not admitted using a needle.

But the UCI said in a statement: “The Cycling Anti-Doping Foundation, independent entity in charge of anti-doping program and investigations for the UCI, is in touch with Ukad to assess the matter. No further comments will be provided at this stage.”

UCI rules announced in 2011 state that “use of injections to administer drugs or substances without a clear and recognised medical indication is prohibited”.

They are clear that the needle-ban relates to any injected substance whether it is prohibited by doping rules or not. Teams and riders must report any instances that could constitute a breach of doping rules - including the use of needles - within 24 hours. A first offence could lead to a suspension from eight days to six months while a second offence within 48 months could lead to a life ban from the sport.

Edmondson told the BBC that he had told Team Sky that he had self-injected. He would face a six month ban for a first offence if it were proved. But this was denied by the team.

“Given our belief there was no evidence of an anti-doping rule violation having taken place, the decision not to escalate or make public the incident was taken with the team’s duty of athlete care in mind,” they said in a statement.

Ukad is already in the midst of an investigation into Team Sky in relation to claims the medical package delivered to Bradley Wiggins in 2011 contained the corticosteroid triamcinolone.