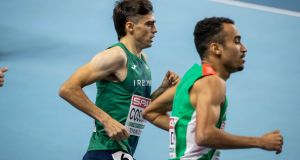 Some superb race execution and near faultless tactics has seen both Andrew Coscoran and Paul Robinson into the 1,500 metres final after the opening session of the European Indoor Championships in Torun, Poland.

As expected qualification across the four heats was hectic, with only the top two in each, plus the four fastest times, making Friday’s 12-man final: Coscoran was the first to book his place after taking third in Heat 2 in 3:39.00, which was the fastest of all the non-automatic qualifiers. That race was won by Spain’s Ignacio Fontes in 3:38.68, the fastest win all evening.

Then came the 29 year-old Robinson who also took third in Heat 4, running strongly throughout to finish just 0.03 off second, running 3:40.07 to the 3:40.03 of Filip Sasinek of the Czech Republic, the win there going to defending champion Marcin Lewandowski in 3:39.78.

The third heat included Norway’s Jacob Ingebrigtsen, who is attempting a 1,500m-3,000m double, who duly booked his place in second (running 3:39.89, Britain’s Neil Gourley taking the win in 3:39.84), while 22 year-old Luke McCann fought hard for a final place too, stumbling a little around the final bend before finishing fifth in 3:41.25 (the same time as fourth place).

Both Coscoran and Robinson, who are part of the Dublin Track Club training group, will contest Friday’s final at 8.35pm Irish time. Michelle Finn also went in round 1 of the women’s 3,000m, finishing ninth in her heat in 9:05.44, three seconds off her season’s best.