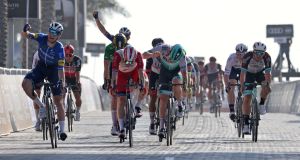 Replace the Champs-Élysées with Palm Jumeirah and it felt like a sort of action replay for Sam Bennett as he wrapped up another superb bunch sprint victory on stage six of the UAE Tour in Dubai.

Two days after securing the 50th win of his professional career, the Irish rider produced another perfectly timed effort to finish over a bike length clear of rivals Elia Viviani and Pascal Ackermann, giving himself time again to raise his right arm in triumph.

The entirely flat 168km stage took place in and around Dubai before heading to the finish at the iconic Palm Jumeirah island, and while there was an early breakaway of six riders, the entire peloton were together again going into the last 10km; with that Bennett’s team Deceuninck-QuickStep moved to the front, his loyal lead-out man Michael Morkov then taking care of business before Bennett hit the front in the last 100 metres.

“Feels amazing,” Bennett said of his second victory this year, in essentially his second bunch sprint. “I think the more sprints we do together, the better we’re getting, it’s becoming more second nature. And it’s just about repeating the same thing, and also making decisions in the final, but we’re really getting to know each other, and the whole team, and we’re pretty much nailing it at the minute.”

Bennett also has the chance for a third win assuming Saturday’s final stage into Abu Dhabi Breakwater also ends in a bunch sprint “We’ll try again on Saturday, it’s always hard, but for sure we’ll go for it again.”

Both Viviani (Cofidis) and Ackermann (Bora-Hansgrohe) chased in vain after Bennett hit the front, his win even more decisive than on Wednesday’s stage four, where he beat the young Dutch rider David Dekker of Jumbo Visma, who finished fourth this time.

After traversing the Dubai desert for a brief while, they returned to the Persian Gulf for the trip on Palm Jumeirah island, which in previous incarnations of the Dubai Tour saw sprint wins for Dylan Groenewegen (2018), Marcel Kittel (2017) and Viviani (2016, 2015).

Bennett came into the UAE Tour under some small pressure, the Irish rider twice denied that 50th career win at the end of last season, beaten by the width of his front tyre in the final stage of the Vuelta a España in Madrid last November, having also being relegated after winning Stage 9 due to some illegal sprint tactics.

Bennett was caught out by an early breakaway in the crosswinds of Sunday’s opening stage, before stage 4 presented itself as the first full bunch sprint of the race.

It finished after three hours and 32 minutes in the saddle, Bennett is well familiar with the hot desert terrain: he also won the final stage here in 2019 into Dubai Safari Park, also finishing fourth on Stage 5 that year.

With two wins from two bunch sprints so far in 2021, his winning record looks to extend well into the season.