The whole point of being a sports fan has always been that sport was just there . . . 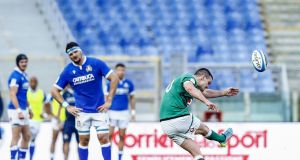 The sports fan finds himself or herself shushing the children for Johnny Sexton’s conversions on the TV. It’s been a tough year. File photograph: Inpho

These are hardy times for the sports fan. You can be sure that in all the coverage of the one-year anniversary of The Very Bad Thing, damn little thought will be given to him. It’ll all be frontline hero this and home-school that and in-it-together the other. Of the sports fan, there will be neither pip nor squeak.

She is fine with this, on the whole. The sport fan knows she is due nobody’s pity. Just as no sane people in their 20s have checked at the vaccine roll-out plan to see how far down the list they sit, so the sports fan knows better than to wallow or complain. She is well aware that more pressing concerns abound. She will survive. As long as she has Eurosport, she knows she’ll stay alive.

Still, it’s not the giggle it used to be. For a start, it feels like a lot more work has to go into it now than before. The whole point of being a sports fan has always been that sport was just there, the wallpaper of life, his to look up at if and when he felt the urge. Nowadays, with everything, it’s almost like he has a duty to himself to stay engaged. As if his sanity will suffer if he doesn’t.

On which note, the sports fan could do without people going on about how great it is for the nation’s mental health that there is sport to watch on TV. She rolls her eyes at the idea that Brighton v Crystal Palace could be good for anyone’s head. She is not so far gone that she can’t tell the difference between taking care of her mental health and actual sadism.

At the same time, the sports fan wonders if giving Monday Night Football a skip was partly why he was jangly all day Tuesday. He went to bed early and read his book and couldn’t fall asleep and lay awake until three in the morning and he knows it sounds stupid but he half puts it down to not having watched Brighton v Crystal Palace like he usually would and it was Wednesday before he was right.

Truth be told, the sports fan really can’t take much more soccer. She loves the sport, don’t get her wrong. But there’s a reason people drink from a glass instead of a hose. It’s on every night, sometimes twice a night. Yesterday, there was nine and a half hours of football to watch. Followed by Match Of The Day 2. She feels like the kid who was caught smoking by her dad and was made to smoke the whole box to put her off it for life.

It wouldn’t be so bad if the sports fan had anyone to talk to about it. Oh, he has WhatsApp groups and text chains and Twitter and all the rest of it but that’s not what sports fandom is, we all know that. He misses the small talk, the bullshit theories, the pub-bore expertise. He misses pub bores. He’d give anything to buy one a pint.

So the sports fan improvises. She over-compensates. The postman noticed her Liverpool tracksuit top when she opened the door to take in a package back in October. It was the day after Virgil Van Dijk got injured and he offered a grimace for her troubles. Big mistake. Now she meets him at the gate to drill him on how he thinks Ozan Kabak is working out. The postman has asked to switch routes.

The sports fan has no shame. There’s a Garda checkpoint around the road from him. The first time he got stopped going to the shops, the Garda spotted the rugby ball in the back and they chatted about the Six Nations for all of four seconds. Twice in the past three weeks, the sports fan has grabbed his keys and headed out, on the off-chance of a snatched word on the dullness of Mike Catt’s attacking plan. Both times he was waved through by the friendly Garda, despite having the window down and everything.

All of this might be bearable if the sports fan could get out and play some actual sport. She would give her right arm to be fouled on a camogie field. You could name any number as green fees for your scruffy pitch and putt course and she’d hand you her debit card and pin code and walk to the first tee. If you told her that the guy with the firework on Grafton Street on Saturday was actually just a frustrated Olympic Trap shooter, she’d think maybe she can see where he’s coming from.

Failing that, what the sports fan needs most of all is to get back into a stadium with people again. He has found that the rest of the house isn’t keen on him calling the dog the two ends of a bollocks so he needs a referee to shout at. His kids looked panicked on Saturday when he stood up and sang Ireland’s Call before the Italy game. They ran to get their mother when he shushed them for Johnny Sexton’s conversions. They need him out of the house, among his own, ASAeffingP.

All in all, the sports fan is on edge. Nothing serious, just basic mania. She knew things were bad when she took a notion over the weekend and logged on to watch the GAA Congress. At one point, she saw something about a motion getting passed whereby teams can no longer have joint captains, or two players going up to collect a trophy.

She took this to mean that the past 12 months have all been a dream, reasoning that not even Congress would concern itself with such a frippery in the middle of a pandemic.

The sports fan would like to wake up now, thanks very much.